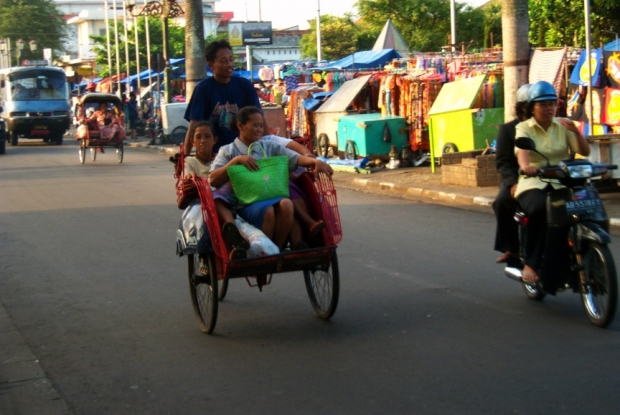 We often rode becak (similar to rickshaw) during the holiday in Yogya for two main reasons: it is environmentally friendly and we wanted to help the poor. However, a couple of times Meidy and I argued on riding a becak. Most of the becak riders are old men and heavy smokers. I feel guilty sitting in front of them while they are sweating kicking the pedals. But, Meidy said they were happy to get money from us.

We also argued on the payment. Once we asked a becak rider how much he wanted for taking us back to our hotel. He said it was up to us to pay him. The ride was only about one kilometer, but we paid him 20K rupiah—normally 10K—because Meidy pitied on him. After that experience, we did not accept “pay as you like” but forced the riders to mention how much they wanted us to pay. I was wondering if the riders would take the payment if it were less than the normal price.

Honesty and trust, I think, exist more in Yogya than other cities in Indonesia. For example, we borrowed an umbrella from a parking man to cross one street. He did not follow us; we returned it after doing the shopping. Meidy had to force him to receive some money. In Jakarta, people would have forced her to pay more.

Posted On 20th December 2013 ~ 0 Comments
When I started my health and conservation project in Sulawesi two years ago, I was optimistic with fundraising at Green School, Bali. I worked here

Posted On 9th May 2017 ~ 0 Comments
"Is there any discount for doctor?" I said, "I am a doctor." I could see he was surprised and then looked at my medical record

Posted On 28th December 2012 ~ 0 Comments
Chinese is about 5% of Indonesia population. Japanese, outside Bali, is rarely seen on the streets. Indonesians can easily distinguish them. But, most of them