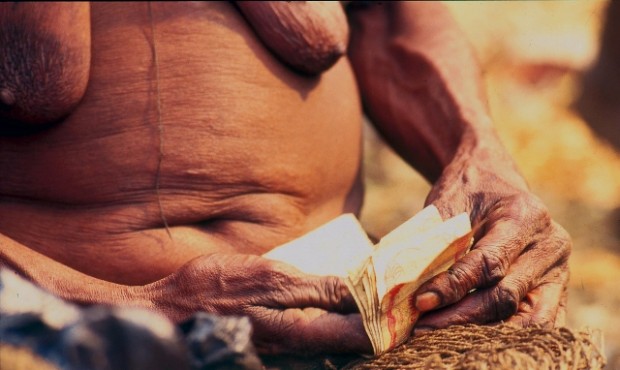 “Thirty-one,” Meidy replied to my question on the balance of my bank account.

“Thirty-one?” I was confused, either she might have not had heard my question well or I misheard her answer; the boat engine next to our right side was very loud. We were on the way home from Plank Island—the tourists of Togean Islands name it Gypsy village—where the public boat brought Meidy home from Ampana moored.

“Yes, yes,” she confirmed with irritation. It was 12 million rupiah more than supposed to be, which equals around US$ 1,000.

“It must be the Angel Nat,” I said. “I had asked him to wire $50 for testing the new bank account on our webpage.” I had not been sure my national bank account—replacing my closed international one—could accept an international transfer, and it seems it can. I was so relieved by both the transfer and the working system.

About two weeks before I had a dream of counting money at a bank. The number of the notes is fewer than supposed to be; I panic and look on the floor under my seat searching for the missing notes. In the morning, I realized that even though I had managed to drive away my anxiety from my mind most of the time with mindfulness and reasoning—no use to worry about having not enough money to buy food two month from now—the anxiety came up the surface from my unconscious mind while my prefrontal lobe brain was paralyzed during the sleep. This event shows me that I have a very limited control on my own mind.

Nat Cohen—a father of two former students of Green School in Bali—had donated $11,000 before and paid the fee of our website (www.dratingfoundation.org) since 2012. He offered me another $1000 last September, but I asked him to hold it because I still had some money to cover the cost of our living for three months. He had helped us too much.

Since then Meidy and I have lived frugally. We do not buy vegetables regularly anymore, saving $75 per month, and eat whatever grows in our garden, such as the leaves of cassava, sweet potato, papaya, etc. We still, however, have to buy rice, flour, sugar, coffee, frying oil, cooking gas, soaps, and some other manufactured products. And we still buy fish from the fishers if they bring it to our beach—about three times a month—because we are not good at fishing, feel bad to kill the hooked fish, and want to help the fishers.

With most time spent on my crop garden, my time for creating and maintaining trails in the forest has been reduced significantly. This is not good; I must do it as soon as I can for preparing a wildlife survey before the island ring road construction started, the beginning of the disaster chain reaction. The survey result might likely lead me to run an Operation Noah’s Ark–relocating all terrestrial wildlife of Malenge to one of the uninhabited islands nearby–if funding available, or mourn for their extinction. But, air stewardesses say we have put the mask on ourselves first before doing it on our child during the emergency; in my present situation, I have to keep myself afloat before saving the drowning wildlife. Fortunately, Nat has helped both of us because now I can spend more time in the forest, at least for the next two month. I wish there were more than one Nat in the world.

Between Comfortable Life and Fufilling Life

Posted On 30th June 2013 ~ 0 Comments
“It is an unwise decision. You will have no job, no house, and no money,” my boss tried to be polite by replacing ‘stupid decision’

Posted On 2nd December 2013 ~ 0 Comments
“I remember your face, but do not remember your name,” the nun told me. I forgave her; she is 74 and the last time we