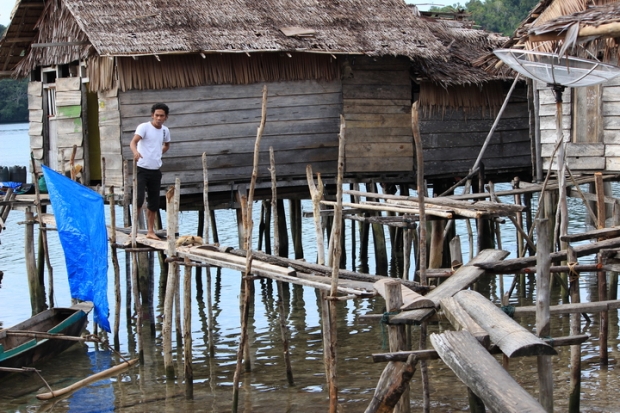 Living in the community is the best way to know the community; I believe in this principle and, in the previous visit to Togean Islands, my contact Asrin had welcomed me to stay in his house in Tangkian Island. Tangkian is a tiny rocky island five kilometer from Kadidiri Island, the main destination of international tourist in Togean.

One day before heading to Tangkian, I had bought in Ampana Harbor town all things needed to stay in the village:
– mattress, sheet set (with pillow and Dutch wife [what a name!] covers), mat, kitchenware, dining ware, bucket, bowl, stool, candles, etc.;
– one box of bottled drinking water (20 kg);
– 10 kg of rice, a box of instant noodle, 8 packs of super-instant noodle, sugar, salt, pepper, eggs, etc.;
– fresh vegetables and chilly (I cannot eat without it).
From Bali, I had brought cake, cookies, chocolate bars, snickers, coffee, tea, creamer, and instant chocolate drink.

With so much cargo, I had to charter a small boat. We departed from Ampana at 7:30 and arrived at Tangkian at noon; luckily, the sea was calm so all cargo were dry. But, unluckily, Asrin was not at home. Some people I had met before were at the front deck of his house. I told them I would stay in Asrin’s house for a few days and they just nodded.

“Doctor, do you have medicine for itch?” one woman asked me. I then did standard procedure to diagnose the itch. It was Scabies, a parasite infestation in the skin. The mites burrow tunnels in the folding areas of the skin such as between toes or fingers, wrists, armpits, or buttock. The infestation is not dangerous, unless the wounds are infected by bacteria, but it is very contagious and torturing. People keep scratching all night.

“I am sorry that I do not bring the medicine for the itch,” I said. “I will bring it in the next visit.” The salve is not expensive, but I have to bring it in large amount, kilograms, because all the people (around 120) in the village must have Scabies—in fact they informed me all people in the district (>4000) had it. The most complicated is the preparation; before treatment, I want them to wash all bedding linen with hot water, dry them under the sun for days, and do the same with the beds and mats. Public health treatment is much harder than medical one.

They were watching me to organize my stuff and asked for medicine for other medical problems. I told them I would treat them later, irritatingly; I was exhausted, thirsty, and hungry, but not even a glass of water offered.

I entered the house. “Could I sleep here?” I pointed the floor at the front corner of the alley.

The oldest woman said, “You may sleep here.” She opened the curtain of the front bedroom—the house has two bedrooms. There was a wooden bed covered by a mat for two persons width and two pillows. Nothing else was inside because the bed only left a space of a body width with the wall at the side and foot edge. However, I was happy; it was better than expected: sleeping on the floor of the alley.

They left the house when I started to clean up the room. I smelled something bad, a carcass, but I was not sure whereabouts the source was. The first thing I needed to do was to find the insecticide I had prepared for bedbugs. I got the Baygon spray and Thyrax solution (donated by a parent of Green School). I felt lucky to have them because without them, I certainly would get Scabies.

I pulled up the bed planks one by one. The carcass stench was more intense. And, there you go, a dead rat without head, stuck to the floor. I picked it up with the toilet tissue; it had been hardened. I found its head at the floor of the bedhead. The cat I had seen outside before must have been the killer.

I moved the pillows and mat out of the room; they were very dirty and smelly. Then I sprayed all parts of the bed liberally with the Baygon and Thyrax—having Scabies is a nightmare—I did not miss any single crevice on the planks. I hoped the spray would kill all the bugs and scabies mites.

Asrin had not stayed in the house since marrying his second wife a month before. He was building a house in her village, two-hour rowing. His first wife had married to another man in Ampana, leaving him with three children: 6, 9, and 12. Divorce is a universal human’s stupidity, from the modern high-class society to the hunter-gatherers in the bush of Papua. The victim is always the same: the children.

Asrin’s house is the best in the village in term of the front view (facing the forested strait between Togean and Kadidiri Islands), cleanliness, and tidiness. While he was away, Asa, his uncle, stayed in the house. He was a quiet man, about 45. I asked him where his wife and children had been. He said he had not been married yet. That was very unusual for a villager. The next day I knew why he did not get married. No woman wanted to marry a retarded man, no matter how hard he works in his garden every day.

For lunch, I ate the cake I brought from Bali. For dinner, I prepared the supermie, instant noodle. I did not see any food material in the house. Asa must have eaten next door, with Nursan, Asrin’s brother. I took out three packs for us but had to add two more when someone came in. Five packs with vegetables and eggs were enough for three persons. However, I took another two for the next visitor. Overtime, more people were flowing in, but I decided not to feed them all.

People, including women and children, were watching me cooking behind me in the kitchen. Nobody tried to help me out. On finishing, I spooned out a bowl of the noodle from the saucepan and left the rest for the audience, about 10 persons. They had to figure out how to share it by themselves.

Guest serving host is not a new experience to me. In the interior of Papua, I had always cooked my own food in the host’s house and finished my food supply in the first three days of the trip. In the rest of the trip, I had eaten whatever the indigenous hosts eaten: sweet potato, taro, sago, plantain, forest starch, and any edible leaves. The experience was repeated in Sulawesi, unexpected but unsurprising.

Posted On 23rd June 2017 ~ 0 Comments
The Wildlife For one year I have not seen any babirusa around our home and along my trails, but some people reported they saw some

Posted On 17th April 2022 ~ 0 Comments
I have to accept the reality of life that at dusk we lose our fitness. I haven’t visited the animals in the forest for two