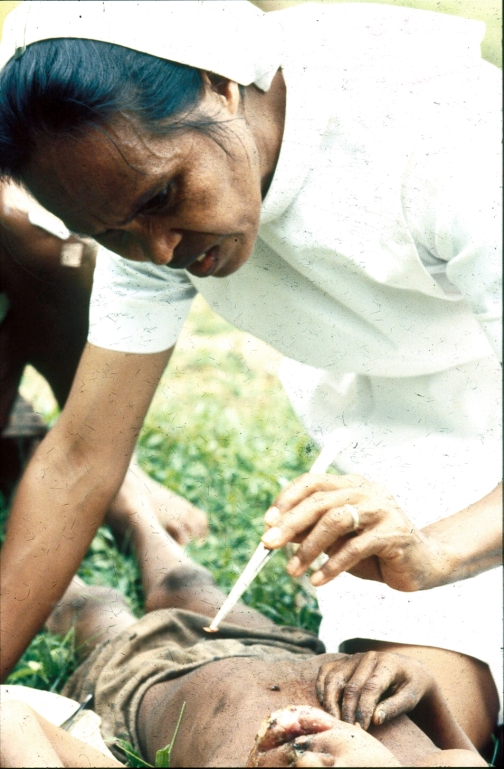 “Come quickly, Doctor,” Sister Priscilla called me through the window. I got up from the desk and walked out. She was still out of breath from hurrying up; she needed that exercise to reduce her weight, about 20 kilogram heavier than me. “Looked at his chin, Doctor.” Pris pointed at the child on the lap of a man.

He was about between 3 and 4 years old, dirty and skinny. His chin up to lower lip was red and swollen, covered with dirt and pus. I looked at it closer: something moving in the abscess. ‘What the hell it is!’

“What animal is it, Doctor?”

Under the torch light, I picked up the creature with a forceps and examined it under the sunlight. “It looked like a maggot, Sister.” I inspected again the wound; swabbed it with a piece of wet gauze—got more the creatures and there was a hole under the layer of pus. I probed it with the tip of the forceps—the boy was wriggling—until it stuck against something. I pushed the forceps harder and passed the block easily—he was crying now—but then hit something hard. The forceps had entered the wound deeper than the thick of the wall of chin; its tip hit the gum. It was a duct.

After pulling out the forceps, I examined the mouth. The gum was swollen and covered with pus. “Wait, Sister. I want to look up in the books.”

I skimmed the parasite infection section of the Manson’s Tropical Diseases. Myasis was the most likely diagnosis: flies or other insects lay eggs on human tissue and the maggot hatched from the eggs feed on the tissue. It is certainly rare because the flies need prolonged contact with the skin. It will not happen to the people who wash their skin every day.

I went back to the hospital, asked Priscilla to clean up the wound, and then re-read the myasis. It was only two paragraphs and nothing written how to manage it. Priscilla came interrupting my reading, “I am sorry, Doc. I cannot do it.” She looked pale.

“You threw up?” She nodded sheepishly. I had predicted before because she had had the same experience with pulling live round worms out of the nose and mouth of the children. When children have high fever, the body is too hot for intestinal worms and they crawled out through anus, mouth, and nose for cooler space. An adult roundworm could be 50 cm long and one child could expel 4 – 5 worms.

“I will clean him by myself,” I told her. I grabbed my camera before leaving the house. Rare cases were interesting photography objects.

When I arrived, Sister Victoria was busy pulling out the maggots one by one. Pris felt bad and had called her senior to do the task she had failed to do. I cut out the dead tissue, the maggot’s food, as much as I could. The boy was lying still until I reached the healthy tissue—bleeding on cut. I injected local anesthetics around the abscess but still needed some people to restrain him.

Pris still dared watching and kept saying ‘eeh!’ for each maggot we grasped. I squirted mild antiseptic with a syringe into the wound and more maggots came out. We also snatched them from inside the mouth—they had run to the other end of the tunnel.

“Collect them, Sister. We are going to bake them,” I teased Pris. The Asmat bake sago grubs, but they are much bigger than maggots.

I squirted the tunnel with sterile water and mild antiseptics from both ends of the tunnel. We could not use strong antiseptics—including rubbing alcohol and betadine—because the boy might swallow it. I could only use boor water, antiseptics for washing eyes.

It took us about two hours to remove the maggots—total 73, according Sister Vic afterward—and dead tissues; they might be some more inside. We closed the wound with antibiotic cream and asked the parents to stay in the hospital for three days. Every day Sister Vic dressed the wound and removed some more maggots. During this hospitalization, she taught his parents how to take care of the wound. Two weeks later, the parents brought him back for checking-up. He looked amazing. The tunnel had been closed; he was clean and fresh; and gained weight.