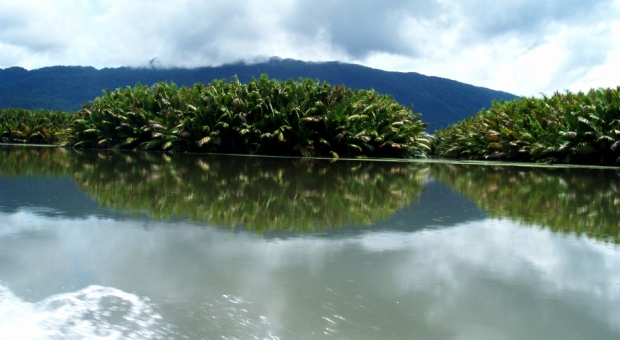 The engine started ‘coughing’, the boat was moving forward haltingly. ‘Please, please, don’t break down here,’ I talked to the machine. We almost reached the mouth of Betz River, and the next would be the most turbulent water in the region. It was the spot where Betz met Siretz (two of the largest rivers—cruise-able by ships 90 kilometers inland— in Papua) in the Arafura Sea. The story of missing Michael Rockefeller haunted me because I was only a few kilometers away from his missing place.

On November 17, 1961, Rockefeller and Dutch anthropologist René Wassing were in a 40-foot dugout canoe about three miles from shore when their double pontoon boat was swamped and overturned. Their two local guides swam for help, but it was slow in coming. After drifting for some time, Rockefeller said to Wassing “I think I can make it” and swam for shore. It is estimated that the boat was twelve miles from the shore when he made the attempt to swim to safety, supporting the theory that he died from exposure, exhaustion, and/or drowning. Wassing was rescued the next day, while Rockefeller was never seen again, despite an intensive and lengthy search effort. At the time, Rockefeller’s disappearance was a major world news item. His body was never found. He was declared legally dead in 1964. (Wikipedia)

The engine was off a few meters ahead. Frans, my motorist, had pulled out the starter rope around eight times before I stopped him. Nothing blocked the fuel line. He lifted the engine lid and checked the spark plugs: they were wet. The boat was swaying hard; the waves broke against its body and the seawater splashed into the boat. I reached the toolbox under the canvas covering our cargo. Even with the new plugs, the engine refused to turn on.

Now what? Return to Agats or continue the trip? We left Ewer at six o’clock this morning. It was about ten now—I had no watches. I decided to continue, hoping the engine would be fixed by itself later. Frans jumped into the water and pushed the boat. We had a long paddle, but it was useless for rowing the mission boat—wide flat at the back.

A few minutes later, I followed Frans. I dragged the boat in front, he pushed it at the back. We were about one kilometer off shore; the water up to waist, the mud upper thigh. We were walking like marching soldiers, lifted one leg high and put it far front. The sticky mud made it impossible to walk fast.

The real struggle began when we passed the mouth of Betz River. We could not see the floor of the sea—hopefully no stingray lying on it—therefore I had to rely on my legs to find the best route to pass the most turbulent spot. The burning sun baked my face but I had to preserve drinking water. I estimated, if the engine were repaired by itself, we had to walk for six hours to Basiem. I only brought one leather bag of water, about 0.5 liter.

Passing the dangerous spot, Frans tried again to start the engine. It refused serving us. Walking in deep mud while pushing the boat was very slow. The alternative was sending Frans to Basiem by land. He could reach Basiem within two hours and Ton would send a boat. However, the ghost of Michael Rockefeller haunted me again. Alone in the open sea with little water and food and with the possibility of meeting crocodiles and sharks was too much for me.

We arrived in Basiem around 9 pm. It was the worst sea trip I had ever had in my life: 11 hours walking in the muddy sea.

“We thought you had got lost,” Ton greeted me at the pier. “Sisters in Ewer kept asking about you.”

“Yaah, Pater. I had Michael’s experience but luckily not his destiny,” I said. I slept soundly that night.