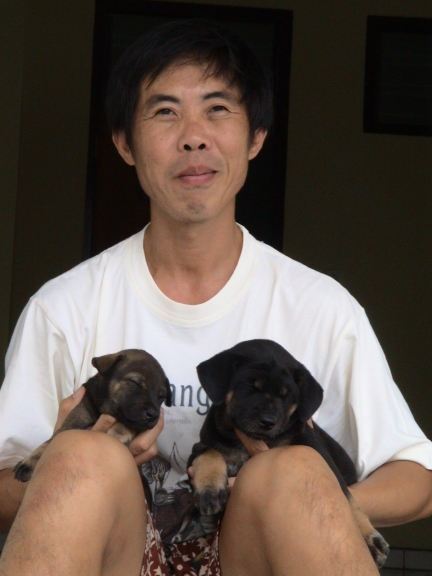 Scientists show that pets, especially dogs, help control blood hypertension and stress. But that was not my reason to have pets whenever feasible. That feasibility covers two ends of my lifetime: the dawn and the dusk.

I had two dogs when I was a young boy in Jakarta. They were my best friends at home. In Yogyakarta, it was not possible to have pets because I lived in a boarding house. In Bayun, I had my own house, therefore had a liberty to have a dog or maybe more. I adopted a puppy in the second month. But there was a big problem.

My schedule was one week in Bayun and one week travelling alternately. During my travelling, the Sisters fed my puppy every day. To save energy from walking to my house, they took the puppy to their convent and fed it there. When I returned, I brought it back to my house. However, when the puppy was able to walk far, it refused to stay with me. It always stayed at the convent. I gave it up; it became a Sister’s dog in the end.

My second pets were a lorry, cockatoo, and cassowary. They had been given or bought from the villagers of the villages I visited—usually still babies. Smart and cute–lorry and cockatoo–naive and huge–cassowary–the birds can be raised without cage. However, their fates were similar to the dog: becoming Sister’s birds. I did not give up though; Bayun was a lonely place, especially after clinic hours. I bought two rabbits from Merauke. They had a different fate–not became Sister’s rabbits–but they ran away to the back jungle.

The Sisters were upset with my fourth pets. There were many snakes between my house and the hospital. I believed they were not poisonous; their heads were not triangle and their colors were not bright. I picked two of them and kept in the house. Within two days, the Sisters gave me an ultimatum: snakes out, or no food delivered to me. No bargaining.