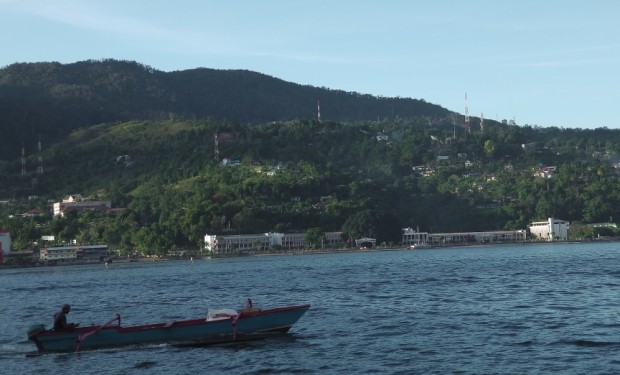 “I am sorry that only one person has applied for the position you advertise,” the personnel staff of the US Embassy in Jakarta told Gary Pachovsky, the Admin Officer of the US NAMRU-2 (Naval Medical Research Unit), by phone.

“It’s great!” Gary said. Of course, it perplexed the Embassy staff, but not for long.

“That one is your man, isn’t he?” She was right. The position was created for me and, for that reason, was only advertised in the Embassy Bulletin—to obey the law: all positions must be made known to the public. Nobody in the Embassy circle would fulfill the qualification of the position.  Moreover, very few people were interested in living in Papua then.

I had met Michael Bangs (entomologist) and Ronald Anthony (immunologist) a year before in Oksibil, Star Mountain, Papua. Their organization, US NAMRU-2, had conducted a malaria research following up the outbreak report (see my previous posting); I had been running away from the malaria in Bayun. I helped them at the field and learned a lot from them how to carry out a malaria research, field and laboratory.

Two months ago, I had sent them a letter of interest to work with NAMRU in Papua. They wrote me back that there had not been any position opened in Papua. However, they asked me to meet them in Jakarta when I had finished my contract in Asmat. The problem was I had no money to pay airfare, 1.5 million rupiah ($300).

Although I had sent the resignation letter to the Government two months before, and had been accepted, my salary still came every month. It saved me because I had no saving from 2-year working in Asmat. However, I needed 6-month salary for the airfare. Mike told me by phone that NAMRU would reimburse the airfare in Jakarta. Fortunately, a friend loaned me the money for it.

Mike arranged the accommodation and per diem while I was in Jakarta for a week. The hotel room was rather luxurious for me—comparing with the bedrooms in Asmat. Per diem was generous too. Mike and Ron had arranged everything; what I needed to do was signing the contract paper—no interview, just introduction to the Director and other senior staff of US NAMRU-2.

Ron and Mike read the appointment letter from the Embassy. I would be the Jayapura laboratory manager—correct—but the grade and step of the position was not. They had written ‘grade 8,’ for the position but the Embassy gave me ‘grade 7 step 4.’ Through Gary, they managed to upgrade my salary classification to ‘grade 8 step 1,’ $200 extra per month. Kind new friends.

Captain Sorensen, the Commanding Officer, was not happy with my recruitment. He had no problem with me—we had never met before—but he disliked Ron Anthony. He forbade me to use one room in the lab for sleeping. Luckily, one week later, he was replaced by Captain Stephen Wignall. He did not mind with my sleeping in the lab.

Three months later, I gave one million rupiah to the finance department of the Provincial Health Office. That was my gaji buta (blind salary: the salary received for doing nothing) for four months. The money was received by the clerk—happily, I assumed—but I am sure it was not returned to the Government. It was fine to me; I lost the money but got back my clear conscience and peaceful mind. Anyway, my current salary 6 times the total of my previous salaries from the Mission and Government.

Posted On 13th October 2013 ~ 0 Comments
Try to recall your life events during your first three years, you will get either none or tiny fragments. Our memory records everything we see,