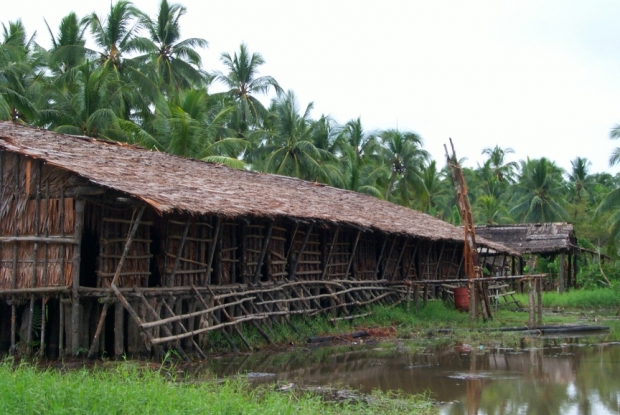 “Who is it?” I was sure it was not the Ursulin Sister because they would have knocked the connecting door instead of the window.

“My daughter wants to unload.” I jumped out of the bed and opened the front door of the presbytery. Three Asmat women were looking at me anxiously. I did not know any of them because I had never stayed long in Ewer. I had been waiting for a flight to Merauke for two days and the Ursulin Sisters kindly—as usual—had provided me bed and meal free.

“Go to the front door of the convent and wait there,” I told them.

I entered the convent and knocked at the door of Sister Liz’s bedroom. Having heard about the women, Liz woke Sister Corina up, her junior. We went to her clinic—Liz was a nurse—to collect the medicine and equipment. It was dark outside. Switching on our torches, we carefully followed the women passing the bachelor long house and turned to the left. I was amazed to see them walking fast in the dark without torch. A few meters ahead, I heard someone groaning from the little hut by the Aswetz River.

The groaning woman was lying on the floor, writhing around. She must have not passed 20, I estimated her age—I was good at it by practice because no local knew their birthday. Some red fluid was under her thigh. I gazed to her belly. No doubt, she was ‘unloading’ her baby.

When I entered the stilt house of the Asmat for the first time, I was wondering where they made love. Unlike the long house of the Dayak people in Borneo, the Asmat’s did not have rooms. People told me they did it in the bush—hopefully they had made sure no ants around—but I had never able to confirm the info. The second question, related to the first, was where the women gave birth. I got the answer: a small hut far away from the village, the one I was in now.

The patient was fully conscious and her vital signs within normal limit for a bleeding person. The fetus’s heart was positive, a little faster than normal; its position was head down and already inside the pelvis. The contractions were still infrequent. We had no gloves; I asked Sister Liz to pour down betadine on my hands and then rubbing alcohol. I pushed my right hand into his vagina. The ostium uteri, the delivery canal mouth of womb, was opened two fingers width; the pelvis seemed in normal size. The amniotic sac was still intact. I did not expect any complication. Just waited.

It was midnight. All villagers had gone to bed. The only sound was the twitter of flying night birds and the music of insects, cicadas was the loudest. Sometimes I heard the splash of river water against the bank. The women and Sisters talked a lot. Corina had never seen a delivery before; therefore, she was excited tonight. Accompanied by one of the women, she returned to the convent to make coffee. I needed it much because it was going to be a long night.

The only problem we had was there was no umbilical scissors and thread. I sterilized a paper scissors and a plastic rope—to slippery for tying the cord but we had no better option.

The patient was calm now, so were the women. Having a doctor seemed reassuring to the locals. Their calmness was helpful me in managing difficult cases. I went out for a walk to the river. It was almost full moon; its shadow on the flowing water was mystical. The voice of the leaves blown by the gust of wind sounded musical to my ears. Peaceful and beautiful.

The dawn was coming. And the baby arrived. It was a boy, a healthy one, his first cry was loud. “What do you want to name him?” Liz asked them. Everybody was quiet. Of course, they would not be able to answer the question. The Papuans never prepared a name for their unborn babies. “How about Doctor’s name?” Liz suggested. And they all nodded. Thus, there was another Ating in Asmat.

But, a year later, both Atings were gone. The old one went to Jayapura and the young one to an unknown place outside the present world.

Posted On 14th April 2013 ~ 0 Comments
The paranormal—para means 'above,' 'against,' 'counter,' 'outside,' or 'beyond'(Wikipedia)—phenomenon is not normally seen in our normal life. I believe I experienced this phenomenon during one