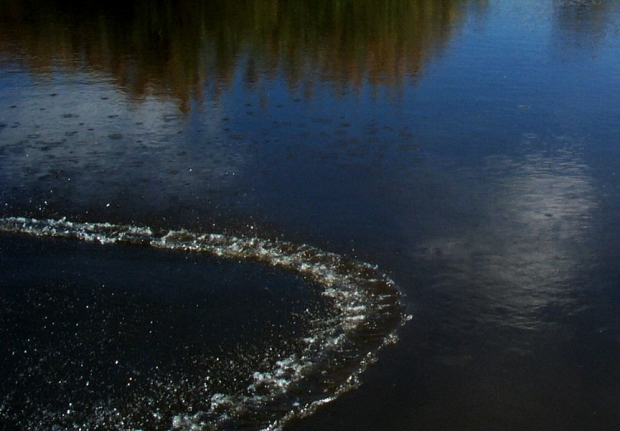 Doing well with farming, I wanted to try with fishing. The Asmat used various methods to catch fish. The most common was spreading a net (stake net?) between two sticks across the river at the end of increasing tide and coming back at the end of decreasing tide. This net would catch medium and big fish such as snappers; some were so big that they had to be carried on a stick between two walking men. During the fish season, people ate only fish because catching them did not need much effort, much less than collecting sago in the jungle. However, this method was not attractive to me. Boring.

The second common method needs more energy and people. A net—about 40 centimeter wide and 8 meter long—was tied to two short sticks. Two persons took this rolled net 15 – 20 meters off shore, depending on the tide height; each one held one stick and spread the net while moving from each other slowly; dipped the net into the floor of the sea; and then, together, moved ashore—slowly and then quickly when the belanak fish (mullet?) started to jump together away from the shore. I always watched the jumping belanak—could be a hundred together—in awe. Many passed over the net, but some of them were trapped. How could they know the best way to escape is jumping?

I thought Belanak were the adult form of mudskippers because they looked alike and they could wander on the coast a few meters behind the water line, but they do not seem so. About 15 cm long, not so delicious though, they were the easiest fish people could catch and available almost the whole year. Nevertheless, the catching method was not ‘artistic’.

The third method using dragbasket—bag-shaped held open by hoops—was only done by women for obvious reason. It is a tormenting way to collect food. The basket was made of natural fiber that made it heavy. Two women, side by side holding the net dipped in the water between them, strolled off the coast. Their legs were in the mud up to knees and their bodies in the water up to waists. They were combing the sea floor for krill—little shrimps. They did it under either the blazing sunlight or the freezing down pour. Obviously, I did not want to try this.

I bought a cast net about three meters in diameter at one market in Merauke—the capital of the regency. The vendor taught me how to use it on the land. It did not look difficult when I watched the Javanese transmigrants in Kumbe using them in the ponds. It did when I tried it.

For the first ten throws, the net landed on the water in closed position; the second ten, shyly opened; only after uncountable times it opened fully but was not consistent—taking weeks to master this skill. However, the first catch was very exciting, albeit only little fish. I caught more kinds of sea creatures in the following catches. They were too small to eat, but they were joyful to watch in the bucket. I released them back into the sea when they started to look weak, including one stingray that stung my right thumb.

The stingray looked pretty and cute—about 10 cm. I had known it stung, and, therefore, I carefully held its body and threw it into the bucket. Its tail was fast; it jabbed my right thumb. Even with antihistamine tablets and hydrocortisone cream, my thumb hurt and swollen for about three days.

Having more confidence with the skill, I spread the net from my dugout at the mouth of Kronkel River. Well, it was much harder. I had to stand, which caused the dugout rock. After the upside down once, I gave up casting net from the dugout. Moreover, too many mosquitoes were under the mangrove.

There were two periods we had hardly any fish. The first was the monsoon season when the sea was too rough and the tide was too high. The second period was when the Thai fishing boats—6 to 10—came. Night and day they wandered in front of our coast with their trawls pulled through the water by pairs of the boats. They caught everything living from the bottom of the sea to the top; ‘a single pass along the seafloor can remove 5 to 25% of the seabed life’ (Wikipedia). They only took the prawns and lobsters, threw away other creatures—most of them already died—into the sea.

The Asmat loved the Thais. They visited the boats and bartered coconuts—most of them stolen from the Mission—with cigarettes, matches, canned sardines, and even the caught fish. Nothing much I could do to drive away these illegal fishing boats—they threatened me with a gun when I cruised approaching one of their boats. People said they had been backed up by a powerful woman in Jakarta—it was Soeharto era then.

Posted On 16th October 2013 ~ 0 Comments
“If you want to stay, I can help you.” James Peacock had been very kind to me. This offer was the peak; I was leaving

Biodiversity in Our Body

Posted On 30th May 2013 ~ 0 Comments
Casuarinen Coast is a dream laboratory for tropical diseases researcher. They can find almost all tropical diseases mentioned in textbooks plus undiagnosed ones. Sampling size—the