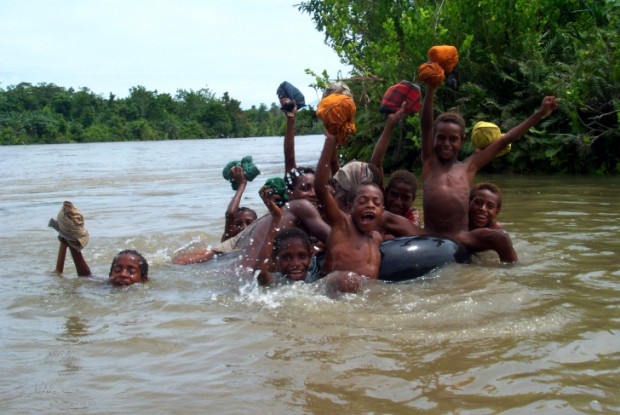 Returning to Kago was not as hard as coming from. Many children of Mayuberi accompanied us—they could walk round trip within a day. My backpack moved from one’s to another’s back. Still I was the second slowest person after David. At one stop, I shared the last pack of my cookies with them. All 7 boys got one cookie each, but I still had one left. I gave it to the youngest boy, about 5. For a while, he looked at the cookie and then at his friend sitting next to him, a bit older than him, and the cookie again, thinking, before splitting it into two. The friend looked grateful for the half cookie. Sharing food is one of the universal customs in the interior of Papua. If they do not have enough food for everybody, they have to keep it secretly and wait until nobody around before eating it.

We entered the first village; it was quiet. But we heard people shouting at the end of the village. They were all gathered in the open space separating their village with another village. I saw two groups facing each other about 50 meters apart. The group of the other village looked furious; they threatened the opposite group with pointing bows and arrows.

“Perkara,” Allo, the mantri, told me; it means “case.” He then talked to some villagers. “His wife had an affair with the preacher,” he pointed to a man in the furious group. The husband demanded a fine, and yesterday they had agreed that 8 pigs would be paid to him. This morning he refused to accept the pigs because they consisted of one adult, one teen, and six piglets! They were renegotiating again now, but I did not stay for the result; it could take another day to reach the deal.

As adultery was profitable to husbands, some men made it business. In Ilaga, some tribal chiefs could have more than 15 wives; most of these chiefs were old men, who might have not been interested in sexual activity anymore. However, wives did not function as soul mates or sexual mates to these senior chiefs, but sources of revenue. They spread their young wives around, and predictably, they would get more pigs from the “other men.” With the extra pigs, they would find extra wives.

Dowries are paid by the man or his family in pig currency. The “price” of a woman varies between 5 to 15 adult pigs. What kind woman was the most valuable? The men I asked discussed my question and finally agreed that the most valuable woman was the woman who was able to work hard in the garden. Productivity is the indicator, which is not much different from valuing basketball players. No wonder some anthropologists called Melanesians “primitive capitalists.”

Bad news was waiting for us in Kago. There would not be any Merpati flight for an unknown time; the pilots were on strike because one of them was punched by a soldier in Kago last week, which was unusual: soldiers and police were powerful in the interior. The problem was David had had a scheduled flight back to USA in the following week. People suggested checking the missionary’s aviation.

We went to the airstrip of MAF (Mission Aviation Fellowship) in Eromaga, one-hour walk. Gordon Larson, an American, greeted us and provided tea in his small radio room. His wife seemed unwelcome visitors in their house, and Gordon respected her much. Gordon had lived in Ilaga for about 32 years and he spoke both Dani and Damal languages. He even translated the bibble into those languages. The centers of MAF in Sentani and Nabire informed him there would be only one flight this week, but only one seat available. He suggested we checked with AMA in Gome.

Gome is less than an hour-walk from Eromaga. The airstrip belongs to the AMA (Associated Mission Aviation). Thus, there were 3 airstrips in a small area. This phenomenon is the picture of the hostility between Protestant and Catholic, and the tension between both and the Government: Eromaga is Protestant, Gome Catholic, and Kago Government. On the average, each airstrip was landed twice per month.

Petrus Alom, AMA staff in Gome, informed us that there was no flight scheduled this week. However, Sentani Office informed him that there was a chance the flight from Sentani to Enarotali could drop by at Gome and pick a passenger. Since the flight of MAF was more likely, David stood by at Eromaga and I at Gome.

Every morning and afternoon, I accompanied Petrus sitting in front the SSB, the communication radio. And every day, he asked for a flight from Sentani or Nabire; the request was not urgent enough to send an aircraft to Gome. Days passed slowly. My modern food supply had finished; as no crayfish in Gome, I ate supermie, cabbage, and sweet potato three times a day.

I stayed in the wooden house of Petrus, which had no bed—the family slept in the honai, the traditional hut. I had to join three wooden chairs to make my bed. They were narrow and hard. Nights were long. My candles finished on day 3, and Petrus’ lantern had no kerosene on day 5; I could not read and sleep. Dark and freezing; I could have joined the family in the honai, which was warm, but the smoke was too much for my lungs and eyes, and the kutu babi, pig fleas for my skin—they shared rooms with pigs.

Lonely evenings were torturing and terrifying. I was not alone in the house, actually. But my roommate, Petrus’ grandfather, was quiet and scary. As Grandpa used to be a great tribal chief, they mummified his body—skeleton covered with smoked flesh and skin. They kept him in a wooden box in kneeling position, and he watched me with his empty eye sockets every night. Luckily and finally, on day 7, Pilot Arnold (died on his crashed plane in 2012) came and took me to Waghete.

Posted On 20th May 2013 ~ 0 Comments
Anytime packages from Basiem or Agats arrived in Bayun, the mail bundle was always the first I checked. Most of the time, I was disappointed.