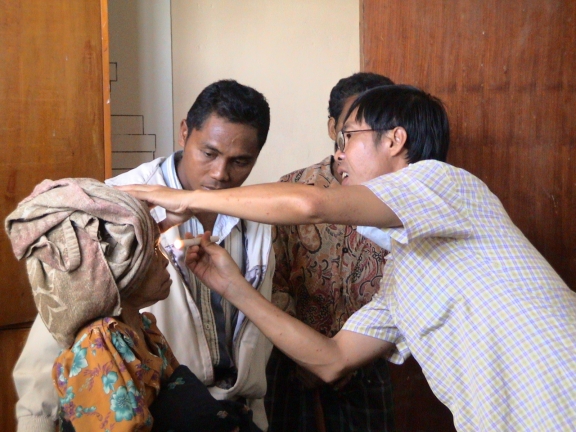 Compassionate people are not so many in the world, I mean the genuinely ones—no hidden self-interest expectation in return. The nuns, the Mothers—not the Fathers—is the group I find has many compassionate people among its members. Of course, it has many hypocrite members too, but relatively low comparing with the Fathers and Doctors.

Two day after discharged, I returned to Panti Rapih Hospital. Not as a patient. The Bayun Hospital had an X-Ray machine and Pater Ton wanted me to use it. Therefore, I needed training in radiology. With the request letter from Jayapura Diocese, I saw the managing director. He turned me down because I did not have a letter from the Health Department. It was quite strange because Panti Rapih is a Catholic Hospital; a letter from a Bishop should have worked.

Not knowing what to do, I left his office. Strangely, I met his son in-law Totok at the emergency room; he was my senior. I told him my problem and he advised me to see Sister Marosa, CB, the nursing director. I did not know her, but I was sure I had often seen her in the hospital chapel.

In her office, introduced myself and explained my purpose. “Oh, you studied at the medical school,” She said. “I often see you in the chapel.” It was not surprising. I had attended the daily mass almost morning in the chapel. Came the first, left the last, and sat on the same place for four years. The chapel was peaceful; only a few spiritual people—not the ones felt obliged by the church order—attended the daily mass; most of the time I just contemplated. On the other hand, Sunday mass was always full; to me it was like a fashion show.

Sister Marosa, the director, asked me to write a request letter for the training, specifying the departments.

“When do you want to start?”

“As soon as possible, Suster.”

I was so happy and a bit amused. Sisters were more powerful than the managing director was.

“What are you doing here?” She surprised me. Another Sister I was familiar with but did not know her name. I was sure the Sister—Inarita, I found out her name later on—did not know my name either.

I told her my business in Panti Rapih that morning. “Have you had the doctor suit?”

“Let’s go to the hospital tailor.” She ordered two at once for me, free of charge. Sisters love ‘religious’ men.

All people in the hospital were kind to me. I got free meals and bedroom, which was next to the delivery room! I loved the midwives; they kept asking me if I had meal anytime I showed up in the delivery ward. The meals were rather boring; I often ate out. However, they insisted that I had to eat the meals.

“If you don’t eat it, si Mbok (the Mother) will reproach us,” they meant Sister Assumpta, the obgyn Boss. Thus, for their happiness, I ate the food even though I was full.

“You must use black magic?” another midwife talked to me.

“She adored you,” Sister Assumpta again. She was famous for being hard to the midwives. “She always asks us when she comes here if we have provided your meal.” She continued. That was my fate. The women who love me were the women I could not marry to.

One year later, during the yearly holiday, I came to Yogyakarta and stayed in ‘my bedroom’ in the hospital. I gave ‘my mother’ an Asmat statue. She put it on the cabinet in the delivery ward but with a cloth covering the penis! It is hard to find Asmat arts that are not classified as pornography.

The motto ‘reducing misery, prolonging life’ of the ancient healers often changes into the ‘prolonging misery, thickening bank account’ of the modern doctors. As they are the majority and have done it so many years, they are the ‘normal’ doctors. If we were their patients, they did not look normal anymore.

Lilis had a painful lump on her right thigh for months before admitted to Panti Rapih Hospital. She was young and beautiful, and pregnant for the first time. Suspecting she had a tumor, her doctor consulted with a general surgeon on the diagnosis. This GS referred Lilis to an orthopedist, bone surgeon. Lilis has osteoblastoma in advanced stage; prognosis: she had only a few months to live. Amputation of her right leg would extend her life for a few weeks or months. However, the prognosis was not passed to either Lilis or her family.

Lilis was under the care of the ward doctor and the orthopedist. Oddly, the general surgeon still visited her every day. He stood at the end of her bed, flipping through her medical chart, scribbling one line, and signing it. About 3 – 4 minutes; hardly any conversation. The family was happy with his visit—a caring doctor. However, their happiness ended when they looked at the bill. That 3-minute cost them 75,000 rupiah (~ $30) per day; and he already visited Lilis 10 days.

I followed up Lilis’ course of illness since her admission in the ER. I dropped in on her and chatted with her and her family every day. But I never brought up the prognosis; I was not in the position of passing it. However, I got involved when they showed me the bill.

Every day they had to pay the fees of 4 doctors: ward GP, orthopedist, obstetrician, and general surgeon. The first three was appropriate, but not the latest one. I suggested that they asked the management to remove the general surgeon from the list. They did so. I also talked to Sister Inarita about this misbehavior. She said she had noticed of it, but the management could do nothing much. Lilis died a month ago in her home.

Not all doctors are evil. Most of them are just ‘normal’; they need money for covering their family expenses and saving for the future. But Doctor Soeroso was exceptional. He had been my doctor when I was hospitalized for an ‘unknown’ sickness. Then he was my tutor in the radiology training.

He was a somber man, but the radiology staff told me an amusing story about him. He always complained about how little the money he received at the end of the month. He was senior, almost 80, and a lung specialist. But he lived in a small house belonged to the hospital.

His earning, on the paper, was more than enough. The hospital gave him base salary and fees by patient. He had more than 15 patients per day—about 350 per month. The fee was 20,000 rupiah ($8) per patient. Nevertheless, the doctor had right to change the fee, his fee from the patient. That was the problem. Doctor Soeroso loved to jot ‘free of charge’ on the medical charts of his patients.

Posted On 6th June 2013 ~ 0 Comments
One afternoon, Sister Priscilla, the hospital nurse, reported that a patient was in labour.  The patient was admitted in the morning but the progress was