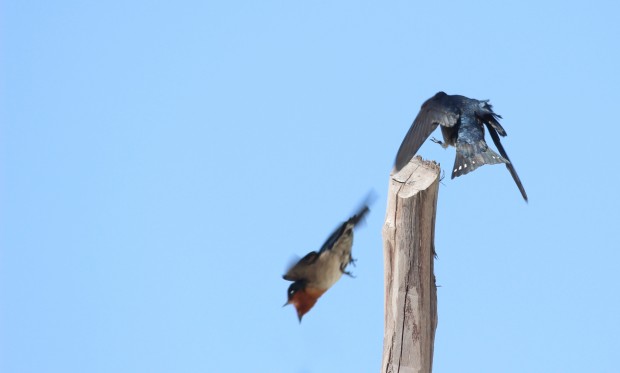 “Make extra,” I said to Meidy, who was making donuts for our breakfast tomorrow morning. “I will sell them to Sera Cottages. It is full now.”

“Seriously?” she did not believe I would do it. I am very bad at business, people say too shy and honest. And, moreover, selling cakes person to person on a small tray is only done by poor people, almost all of them have limited education. As we are poor, I am qualified for the job; education are not supposed to prevent me taking this job.

An hour later, I walked up the west cliff and then down the next bay. There were two tourists on the hammocks in front of the first cottage. I hesitated to approach them, afraid of disturbing them. But finally I managed to overcome the inner block.

“Yes, they are still warm.” They stare at me. “You can have a look,” I continued, walked up the porch, and opened the tray on the their coffee table. I brought ten pieces; the male tourist picked up one donut and smelt it.

“My wife has just made it.” He talked to his girlfriend (?) in French.

I visited other cottages and offered the tourists sun bathing on the beach. That day six donuts were sold, almost $5; the profit was around $3. Not bad.

I sell donuts irregularly, depending the number of tourists staying at Sera Cottages. If lucky, I sold all ten and received ‘Keep the change’, which was not often; otherwise, sold one even none. It is OK, life is a struggle by choice for us.

Posted On 18th January 2017 ~ 0 Comments
“I felt someone watching my back while I was planting the seeds in the hill garden. I turned around. Guess, who was watching me?” Meidy

Posted On 14th March 2018 ~ 0 Comments
Forest Trail Because of my poor health after the eye operation in June 2017, I did not work on the forest trail for about two