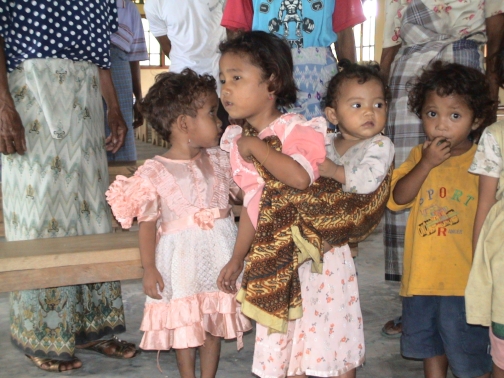 Women is more caring than men even they are very young. Young girl in Flores Island is helping her mother. Most of Florenese women have more than five children.

During the Earth Day celebration at the school, grade one set up a table for our foundation. We sold tarsier T-shirts and asked for direct donations by putting a glass jar on the table. Although a lot of people attended the celebration, only a few stopped by our table, mainly for buying T-shirts. Some donated, but none of them gave more than 100,000 rupiah (11 USD). In the afternoon, we were packing up when Mairead was passing by. I greeted her. “Is this your foundation table?” she asked.

“Yes,” I said and we talked a little before I played with her daughter Siofra; she has two brothers at the school. I noticed that Mairead put some money into the jar. Later my wife Meidy, who helped us with the table, told me that Mairead put 500,000 rupiah into the jar. That was an anomaly. It was almost a half of the funds we raised that day. And, she gave me more in the last week of the school year. I wished most parents of Green School had been like her.

I rarely received individual email from the finance department. I received one in the last week of the school year; it was surprising. They asked me the bank account I would like to receive a transfer as the amount of USD 1,000. Consuelo Jackman, a mother of four young students, donated some of her school deposit to our foundation.

The Jackmans were admitted to Green School in the last semester. Consuelo often visited me with her children, one by one or together. Their medical problems were usually mild but annoying and worrying for her. For me, her appreciation for my service to the foundation was very meaningful.

It was two weeks to go to the end of the school year, but we had only collected about 10 million rupiah (equals 1,100 USD). I drafted my farewell post for the weekly news. http://www.greenschool.org/2012/06/20/green-school-weekly-newsletter-15-jun-2012/ I wrote that I had to postpone the project startup because of inadequate funds. Then, the miracle happened in the last week.

Nathaniel Cohen and Lynn Parseghian are the parents of Charlotte of grade one, the first donor of the foundation (see “First Donor . . .” posting). They had helped with editing my life story. Nat came to me when I was sitting on the bench at the gym during the break; I did this every day for three years. He asked me if I had received his donation he transferred through the website bank account. I told him that the Gelins had not informed me yet and I asked him how much he transferred. “Ten thousand,” he said.

“Ten thousands?” I repeated his words.

“Yes. 10K,” he confirmed. I must have looked like a stupid person, staring at him unbelievably.

“You are so generous, Nat.” I hugged him.

“It is a good year for me,” he said modestly. His donation was confirmed by Sven Gelin later on.

Posted On 24th September 2012 ~ 0 Comments
Jerry Lloyd Jerry and I joined Green School at the same time three years ago. He and Lee Wood—already left—are the people I like most

Posted On 5th December 2012 ~ 0 Comments
Giving money to charities and volunteering are not common practice in the eastern societies. If people do them, these acts are usually related to their

Posted On 24th September 2012 ~ 0 Comments
Owen Orion Husband-Meyer In the second to last week of the school year, Owen (grade 2B) and his mother Rebecca Husband came to the clinic.