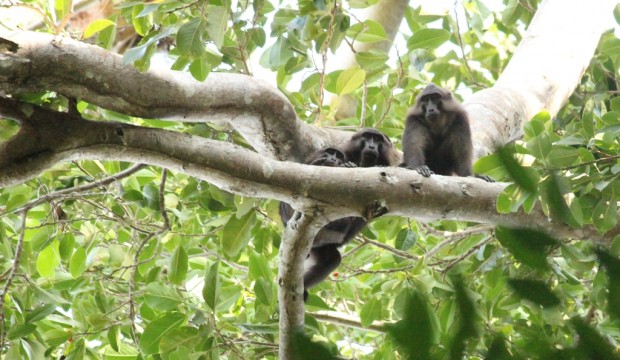 “I felt someone watching my back while I was planting the seeds in the hill garden. I turned around. Guess, who was watching me?” Meidy stared at me with a teasing smile.

“The woody.” There were a pair of woodpecker pecking on one of coconut trees two weeks ago.

“Tommy?” It is the next-bay neighbor’s dog, which likes wandering in our garden.

“No. Macaque,” she showed a satisfied smile.

“Not before I approached it. It did not move for a while.” Amazing Meidy. When I dated her seventeen years ago, she was afraid of any animals, including dog. Now she feeds all animals around us: two dogs and nine chicken of ours, three cats of nobody’s, free birds, bats, and eels and fish in the sea. “Then it turned around heading the mango tree. I saw its white butt.”

“Did it show you its penis?”

“Unluckily, no.” Big smile on her face now. The macaques of Malenge Island are naughty. They will run away if a man spots them in the garden or even in the forest, but they will stay if a woman. If they are in a group, the males will show their penises to the woman.

Seeing macaques in the wild is always exciting. But we see them less often in the last one year. Last week, early morning, I saw a big group among the trees near the gate to the bird valley. Their jumps and swings moved the branches noisily. I felt good; they were still there. I worried that they had been trapped and killed by our species.

The macaques and other wildlife in the forest or our garden are the source of my will to continue living in the hardship. Some tourists, however, said I lived in paradise. They are half right. The white sand, musical waves and ripples, calm azure water, blue sky, clear horizon in front; the dancing palm leaves around our house; the lust green of the side hills; the dense trees on the back slope; and the singing flying birds every morning make our home a paradise, but the hardship on farming and so little money left in my bank account sometimes make me consider to find a job in the normal society.  Seeing the wildlife drives away this thought; my life is meaningful here, I do not live for myself only; they are other sentient beings—powerless and in danger of wiped off the Earth—whose fate depends on my endurance on Malenge.

Posted On 17th April 2022 ~ 0 Comments
I have to accept the reality of life that at dusk we lose our fitness. I haven’t visited the animals in the forest for two

Posted On 11th October 2018 ~ 0 Comments
"Let me do it, otherwise we'll never have it," I said with exasperating tone. Meidy insisted on finding a carpenter albeit we had offered the