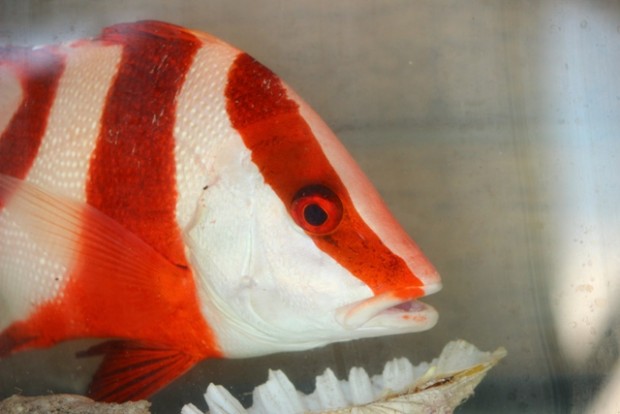 “Doctor, have you ever eaten Napoleon fish?” Upik the fisher asked me.
“Not yet.” Napoleon wrasse is an endangered species and I do not eat endangered species. The adults could reach 2 meters and 180kg (Wikipedia). “May I see it?”
He pointed to the floor of his canoe in front of him. It was about 35 cm and 3 kg, still an young one; green mixed with blue-pink scales; and bumped blue head. Unfortunately, I saw two holes behind the right front fin. He killed it with a spear. I said nothing about my sadness and my attitude toward endangered species.
“Delicious, Doctor, especially woku cooked.” Woku is a unique way of cooking fish from North Sulawesi, and Meidy–she is from there–is very good at doing it.
“How much?”
“If alive, I usually sell it for 100 thousand.” About 8 dollars. In Jakarta or Hongkong, it must worth at least $500.
“Do you have any other fish?” He opened the lid of the bowl behind the Napoleon containing three dead fish, smaller and less beautiful than the wrasse. “Do you have any live fish?”
He looked at me in confusion before replying, “Yes, I have.”
“I will keep the fish in the net over there,” I pointed at the water surface of the east cliff where I had sunk a bag net in the water, “because we don’t have refrigerator.”
Now he was not confused anymore and opened the wooden lid covering the middle part of the canoe floor that was walled by two planks on each side–all fisher’s boat have this water collecting part for keeping the bait and ornamental fish alive. And I saw another fish; it was smaller but no less beautiful than the wrasse (see the second photo).
“I will take it. How much for all?”
He was quiet for a while and said, “Up too you, Doc.” I had expected that answer and started to estimate the weight of the three fish. They were about one kilogram.
“Forty?”
His eyes sparkled. “All yours.”
I returned to my house, came back to the canoe with a bucket, and filled it with sea water. He caught the fish and put it into bucket.
At home I filled my aquarium with sea water and put the fish in. It was indeed a pretty fish.
“How much did you pay the fish?”
“Forty thousands.” It equals $3.
“Expensive!” Yes, she was right, I paid him above normal price, the reason he had been happy hearing my offer. Meidy started mumbling.
“It is OK. The price for saving a fish.” And I told her I was going to release the fish back into the ocean after taking its photos. She looked please now.
“Do it quickly! It will die if you keep it too long in the aquarium.” Meidy loves all animals except snake.
I executed my Majesty’s order with my camera, moved the fish back into the bucket, and took it toward the line between the sea grass and the white sand. The fish did not swim much in the water, I was still able to hold it. Then I drove it farther into the sea grasses, and it started to swim faster before disappeared. I felt good and Meidy was happy. I wish the fish a long life.

Posted On 13th November 2013 ~ 0 Comments
Wiah, my neighbor who was one of my visitors, called to the man in the motor canoe. The man pulled towards my house’s front deck

Posted On 18th June 2014 ~ 0 Comments
"Dr. Jane, you have worked so long on conservation. How could you still be hopeful?” I asked one of the most famous primatologists in the

Posted On 17th November 2013 ~ 0 Comments
First, I read this: These [Togean] islands also support one of the last populations of the endangered coconut crab, a giant crab that spends most