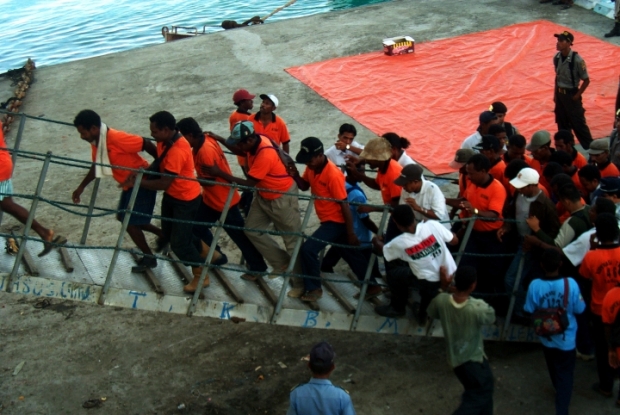 “Where is he from?” I asked the doctor of the Abepura Hospital. She looked at the nurses.

“We don’t know,” one of them answered.

“Who brought him here?”

“His friends, might be. But they are gone.” There was no way to get the answer now because the patient was unconscious. In America, he would have been named ‘John Doe’, but I preferred “Yohanes Kogoya’ because, looking at his posture and face, I was sure he was a highlander and was likely a Western Dani.

The West Dani area has been the most populated region in the Central Highland of Papua. The people practiced slash-and-burn cultivation on the steep slopes of the mountains. The population pressure forced these people to shorten the fallow period because the cultivable land was limited. As the result, the harvest was not as good as before; soil needs adequate time to recover. Then, malnutrition and starvation happened more often. The practical solution was leaving the area.

Jayapura has been one of the main urban destinations, second to Tembagapura and Timika, the Freeport mining area. The mode was typical: started by a few tribal men living in the shanties up the slope of the hills in either Jayapura or Sentani; taking manual labor—almost all of them were illiterate—whatever the town people provided; having made some money, they went home and came back with fellows; and the last stage was bringing their wives and children in. As the airfare was expensive, many of them came on foot—walking up and down the mountains, barefoot and hardly any clothes—2 to 3 weeks, nonstop.

Living in urban area with so little money was very hard—a common phenomenon all over developing countries. Nevertheless, people still endure it because there is hope for a better life, while in their home village there is none. However, only a small fraction of them, after years of hardship, gains decent life. The majority still lives in the shanties at the margin of the urban areas for generations.

‘Yohanes Kogoya’ fulfilled the inclusion criteria of the study, which was very good for everybody. I asked the Abepura Hospital staff to let me move him to Dian Harapan Hospital, a Catholic hospital, which had a better quality care; they were happy with this request. On the second day in Dian Harapan—he was still in coma—his folks came. They said they had left him alone because they were afraid of being charged by the Abepura Hospital. My guess was confirmed; they were Western Dani men.

The highlanders were immunologically naïve against malaria because highland, up to early 1990s, was not a suitable habitat for anopheline mosquitoes, too cold for its optimum reproduction. In Jayapura, a coastal town, they were exposed to malaria. The impact is like an unguarded town invaded by Genghis Khan troops. Two of my highland patients died (100% case fatality rate among them). Miraculously, Lukas Murip, the real name of ‘Yohanes Kogoya’, survived uneventfully.

Posted On 2nd June 2013 ~ 0 Comments
It sounded like knocks at the door, but I doubted. I did not think any sensible people would leave their house under the ongoing rainstorm