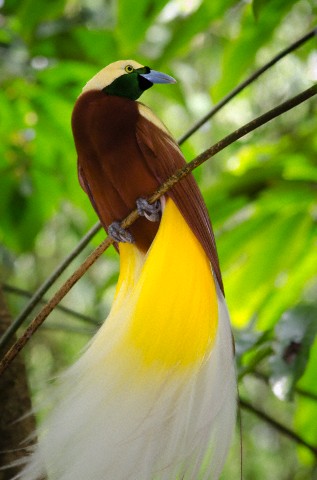 For nine months, I was on-call in four hospitals. But the beeper system was only installed in the Dock 2 hospital; the other hospitals reached me by phone. They called me quite often but only 7 patients were enrolled at the end of the study. The false calls were costly in term of effort and finance. I had to drive a motorbike 35 kilometer to the farthest hospital in Waena from the lab.

Because I only took care of malaria patients, I got a new title: ‘malaria doctor.’ The doctors in the hospitals tended to misuse my malaria skills. My lab tests were more accurate and faster than the ones done by their hospital microscopists. My medical equipment was newer models and better, and I never charged the patients, including non-study subjects for the medical material used.

One day the Head of Provincial Health Office called me. He asked me to check a VVIP patient: the Governor of Papua. Of course, he had been taken care of by all specialists in Jayapura before but he seemed no improvement. The malaria smear was negative but the Head of PHO wanted to make sure it was not false negative.

The Governor sent his driver to pick me up. His house in Angkasa (means ‘sky’ because the area is at the top of a hill) was vast and luxurious, like a palace. He had another house near the Sentani Lake and another wife lived in that house. Two wives for a Papuan Big Man were not many.

Jacob Patipi, the Governor, himself was a big man, physically. I got trouble to palpate his liver and spleen through his potbelly. He looked anxious but I found no significant abnormality. However, his malaria smear was positive 1 for Plasmodium vivax: malaria tertiana.

Positive 1 was indeed difficult to differentiate from negative in the case of malaria tertiana. It means after checking 100 view areas under the microscope, we only find less than 5 parasites. Most microscopists write ‘negative’ on finding no parasite after checking 25 viewing areas. It already takes them around 6 minutes in doing so, but it took about 40 minutes to stain and dry the smears before viewing them.

Persons with malaria tertiana feel unwell if they are naive immunologically, but to the lowland people of Papua this malaria is clinically very mild, just feeling weak. However, the stress, physical and / or psychological, will worsen clinical manifestations. The Governor might be the example of the second case. The Minister of Interior, his boss, was visiting Papua soon.

I treated the Governor with NAMRU’s medicine. He recovers gradually. However, there was no ‘magic word’ from him or the Head of PHO. It is always like that. The ‘lesser’ patients always appreciate me more than the ‘greater’ ones like in the following story.

I opened the lab door. “Nurdin OK?” I asked the young woman who knocked on it. She was the sister of my patient in the ICU.

“He is fine, Doctor.” Nurdin was still in the hospital. He just woke up from a 4-day coma.

“Oh, good,” I said. She looked at me but said nothing. “Anything else I can do?”

“Doctor, how much do we have to pay you?” hesitatingly she asked.

“Nothing.” Nurdin was a study subject, NAMRU paid all his medical expenses.

“We still want to give you money.”

“I am sorry I cannot accept it. It is my duty to take care of him.” And she said ‘thanks’ before leaving.

Nurdin was brought to the hospital six days ago. In the ER, he was agitated and feverish for a few minutes before falling into coma. His family is immigrants from South Sulawesi—they are all over Eastern Indonesia; the most successful immigrant group, I believe, due to their positive character: willing to work hard and endure harsh environment. Nurdin just had come to Jayapura a few months before, and lived with his sister and brother in-law who had a little shop in Ampera market downtown. And they admitted him to a public high school not far from their house.

Based on my clinical observation, I was sure he had cerebral malaria but to be enrolled in the study, his blood smear had to be positive for plasmodium. Ironically, the positivity rate of blood smears from the clinically cerebral malaria cases was very low. Even if positive, they were mostly only plus 1, sometimes plus 2 (+4 is maximum, hundreds of parasites in one drop of random blood and takes only less than 5 seconds to determine it, in contrast to 10 minutes for +1 or negative)

Having finished all clinical procedures—his blood glucose level was rather low but no need for immediate and radical intervention—collected blood samples, and instructed what to do to the nurses, I hurried to the lab. Time is crucial in the lab processing and severe malaria management. Nurdin has +1 Plasmodium falciparum, malaria tropica—an exotic entity, but a deadly disease.

The prognosis of cerebral malaria is closely correlated with the duration of the coma; the longer the coma, the slimmer the chance of survival. The chance is practically zero after day 5. Three of four my previous patients did not survive; that was really quite a blow to me; I felt stupid; the Death Angel might be laughing at me. Don’t laugh, Devil, I have not surrendered yet.

Day 3 had passed but Nurdin was still deep coma. His blood had been clear of malaria parasite. It is the ‘cytokine storm’ that kills the victim severe malaria and other severe infections. Our defense system response overly reacts and destroys our own body system. However, on the day 4 morning, amazingly, Nurdin woke up. I found no neurological defect on day 5. Unlike stroke coma, cerebral malaria rarely causes permanent disability, as long as we are able to maintain the blood glucose level within normal range. The choice is either dead or back to normal, unless the patient wakes up after one-week coma.

The following morning she knocked at my door again. “It is for you, Doctor.” she handed me a small package. “I hope you like it. That is the only gift we can give you. We are not rich.” I had known that.

I was touched. Any gift from sincerity is always valuable. I opened the package after she had left. It was a new shirt, an expensive one. The light-blue color suited my liking; the size was perfect—she had estimated my posture well. I was wondering how long it had taken her to decide that a shirt was the thing I needed. She might have thought I had not had any shirt because I always wore T-shirt, shorts and flip-flop in the hospital—for this comfortable suit, the Bishop of Jayapura and some other people called me ‘Flipflop-Shorts Doctor’. Again, she might have thought, many do, that it had been inappropriate for doctor in the hospital not wearing shirt under their white suite, less charismatic.

Posted On 30th May 2013 ~ 0 Comments
“Do you have a poison, Doctor?” asked Sister Pai. “What for?” I imagined rat. “To poison Swinging Chair.” That was the parochial priest of Bayun.