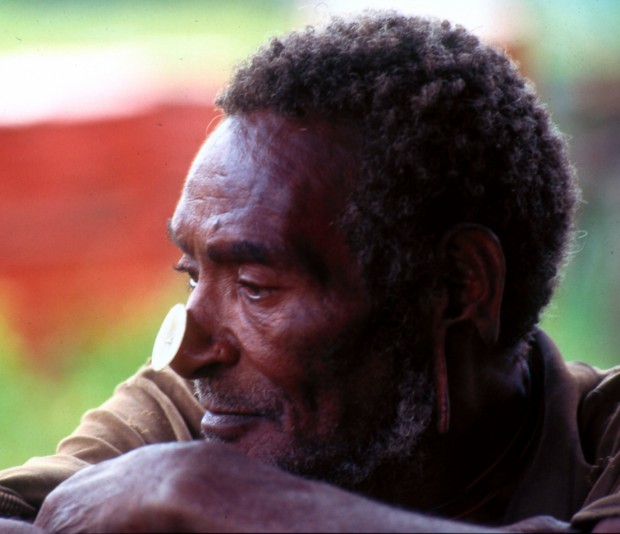 With ten pieces of luggage weighing 70kg, I felt lucky that my friend Lily Sanjaya let me have Alpen, a Moni boy, to accompany me to Bilogai. He watched and carried some of the luggage during the travel. Missing luggage is common at the airports in Papua; I had lost some before.

Airplane delay is the rule if we travel in Papua. My plane from Sentani to Nabire delayed one hour; it is not too bad for traveling in Papua. On arrival at Nabire, I called Jengis, Tendeas’ nephew whom had I never met before. Tendeas is a good friend of mine; from 1999 to 2001 he let me stay in his beach house in Hamadi, Jayapura, for free.

Jengis dropped me at Hotel Nusantara. Nabire has only three hotels: not bad, bad, and very bad. Hotel Nusantara is the bad one; but according to the internet it is the best in Nabire. On the second day, I moved to Hotel Anggrek, the not bad one.

Using the rent car, I explored Nabire and surrounding. The roads were damaged after 25 kilometer from the center of the town. Nabire is a small town. It has only a few big stores and good eating places.

The flying distance from Nabire to Bilogai is around 1.5 hours, longer than from Timika, but Nabire has more flights, more than one flight every day; there are only two flights per week from Timika. Moreover, Nabire is much safer than Timika.

To get seat flying to Bilogai is not easy. Jengis had “connection” at the airport. He picked us up in the morning and introduced us to his inside man. We got special treatment but also special price. I had to pay 600,000 rupiah extra for climbing the list of the passengers of Aviastar.

The terminal building is very simple. Even non-passengers can enter the waiting room. I could see our airplane parking nearby, but we had to wait for three hours before boarding. Seeing people fixing the engine made me nervous. About eight people were kneeling under the airplane, a twin otter with 16 seats. It looked old and unsafe.

We landed at the airstrip of Sugapa easily and safely. The view of the people standing at the side of the airstrip flooded my mind with my past life. Some of them still wore penis gourds, long ones, the tips reaching their necks. Everything looked normal; no sign of tribal war. There was a gathering at the police station; they argued on the issues related to the election of bupati, the head of regency.

Alpen took an ojek, the public motorbike, to carry our luggage to the convent of PRR congregation. I paid 50,000 rupiah for a short distance three times. It is expensive because the fuel is 40,000 rupiah per liter; in Bali 4,500. All the ojek riders and kiosk owners are non-Papuans. They make a lot of money easily from selling their merchandise with unbelievable price. But they also have to sacrifice on living in inconvenient condition: small house and lack of entertainment.

The election is like a joke. For example, a team was supposed to take blank vote forms in metal cases to a village up a mountain. They stopped at a river down the mountain and punched the forms according to their favorite candidates. Thus, about ten people kindly represented about 700 people to vote. The other joke was everybody in the election sites knew which candidate photograph the voters punched because it was done in open space. And, some filled form boxes were burnt before delivered to the committee because the result was not as the carriers’ wanted.

I dropped by at the health center. There were three doctors working there. The most senior had worked for almost three years. The other two were supposed to work in other districts outside Sugapa. But, they never worked there; this is typical problem in Papua: all doctors working in the center of the regency. The health center is very dirty and messy, and lacking of standard equipment and medicine. A dentist was posted there, but there was no dental chair.

The Catholic Mission has a small clinic in Sugapa. The nurse was a nun from Flores Island. She let me and Alpen use one of the rooms for sleeping on the floor. She also cooked our food. The clinic itself was clean and tidy—the opposite of the government health center—but it had hardly any medical equipment and medicine.

I thought the situation in Bilogai was relatively safe. I was wrong. The physical conflict just started this afternoon. The candidate supporters threw rocks to each other and the police shot up the air to stop the fighting. It happened not only in the center of regency, but in villages outside as well.

There was a minor but important incidence when I was in Sugapa. A policeman in civilian clothes, named intel in Bahasa, called my Moni boy and asked him if I were a foreigner. He suspected me so because I was taking pictures and video the oral fighting in front of the office of the election committee. He left us alone when my boy told him I was a missionary doctor.

Posted On 16th November 2012 ~ 0 Comments
When I was forced by my conscience to adopt her in 1991, I was not sure what would happen to Upik. But I was optimistic