On Hands and Knees Moving around: Ruty, the Moni Girl 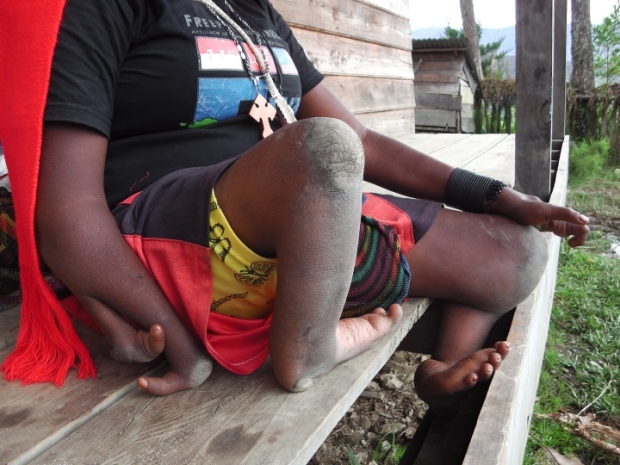 Ruty Boani is the fourth child of a Moni couple in the Titigi village, in Bilogai, Papua. All her older siblings did not survive because they were born with abnormal arms and legs, and their parents dumped them into the Wabu River. Ruty had the same congenital defects (see the picture) but her stepmother (Ruty’s mom was the second wife) stopped her parents from dumping her into the river.

Miraculously, Ruty survives and functions as a “normal” woman of the Papua interior: cultivating sweet potato, taro, and banana; raising pigs, rabbits and chicken; cooking; washing laundry; gathering firewood; and babysitting her younger siblings—three from her own biological mother, all normal, and eight from her stepmother. It is unimaginable to me how a woman who cannot stand is able to do farming. She uses only a wooden stick and her defective arms to plough and plant. And, the soil is always wet and cold (Titigi is about 2000 meter above sea level, and it rains most days of the year).

About five years ago, she was about 17 then—nobody knows her precise age—Ruty decided to move to Sugapa, the center of the district, to live with a group of nuns. She still did the same activities as in Titigi. She made money by selling crops, rabbits, chicken and a pig. The Sisters only gave her a free bedroom; Ruty managed to pay for her own food and clothes.

Two years ago she moved to the mission clinic and lives in a 1.5 x 2-meter bedroom next to the kitchen (check the video clip “On Hands and Knees”). She does not do farming anymore; she makes money by selling betel nuts, instant noodles, cigarettes, etc. by the airstrip or at the market in the morning and afternoon, or just at the bend in front of the clinic. She pays 10,000 rupiah (about one dollar) to the motorbike riders for a one kilometer ride; it is very expensive because the fuel there is 40,000 rupiah per liter, more than 8 times the price outside the interior of Papua.

Although Ruty does not look miserable—she laughs a lot—I am, especially when watching her crawling on the rocky, muddy, and cold ground in front of the clinic where I stay. Her clothes are often wet and dirty when she returns from selling things; but she keeps wearing them so long as they are not totally wet or dirty.
Muddy soil is probably not a big deal for Ruty. It does not hurt her, but sharp rocks do, and they are everywhere except in the building. Her calloused knees and hands are still penetrable by the sharp rocks. She nodded when I asked her if walking on the rocks was hurtful.

I talked to Ruty about obtaining prosthetics for her. She had no idea about them, but she wanted them after I explained the benefits of wearing them. She agreed to be video-recorded to help raise funds. I hope Ruty can walk like a normal human being soon: upright.

Posted On 16th November 2012 ~ 0 Comments
When I was forced by my conscience to adopt her in 1991, I was not sure what would happen to Upik. But I was optimistic