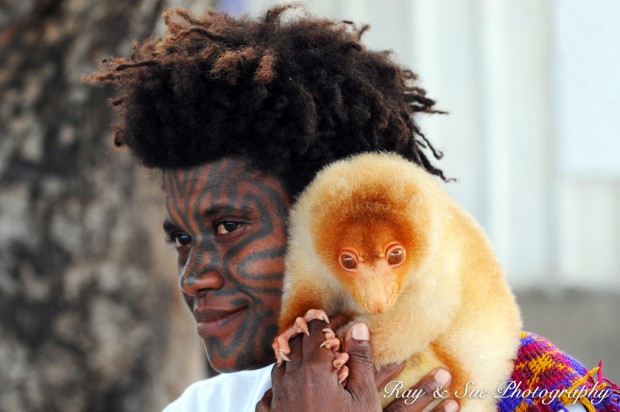 A papuan man stopped me a few meters from my hotel in Jayapura.
“Do you want to buy cuscus?” He showed the cuscus, the flurry brown strips over white fur. It was so cute and beautiful.
“Where did you get it?”
“Sarmi,” he anwerred. I know where it is. A village in the northwest coast of Jayapura. Far away, about 100 kilometer.
I wanted to buy and release it free in the jungle. But, I thought it was not a wise decision; this act would motivate him to catch more cuscus.
“Why did you do it?” I asked him loudly when he blew his cigarette smoke to the face of cuscus.
“It will make him obedient,” he answered. How cruel our human fellow is!
He asked me again if I would buy it. I said I had no money when he told me the price: 2.5 million rupiah. And, in the end, I said I would not buy it because nobody would take care of it when I was away from home.
He took out small cloth bag and showed me a big marble, about 5 cm diameter. It was rather heavy; semi transparent and purplish. There was white circle inside. He said he got it from the stomach of the cuscus’s mother he killed. Another cruelty.
I bought it for 400 thou for curious reason. I might have been cheated. Let’s see if anyone can tell me what the marble is. But, the image of the big eyes of the cuscus never left my mind until this writing. Its fate is obvious: it will die soon miserably. I wish I had saved it.

On Hands and Knees Moving around: Ruty, the Moni Girl