Biodiversity in Our Body 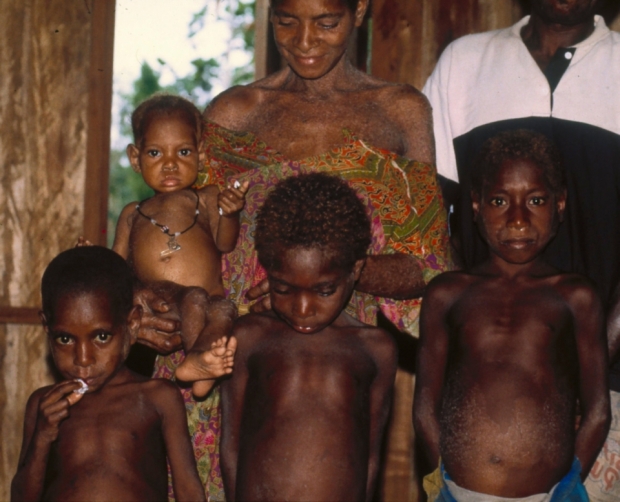 Casuarinen Coast is a dream laboratory for tropical diseases researcher. They can find almost all tropical diseases mentioned in textbooks plus undiagnosed ones. Sampling size—the most common and difficult problem of medical research—will not be an issue here; they can get the patients as many as they want, with one condition: they do not mind to chase the research subjects into the jungle during certain months.

Pater Ton told me that he had sent an Asmat woman to Jakarta—very costly—for treating her infection on her legs. He had tried with any antibiotics available, so did the doctors later in Jakarta. As no drug worked, the doctor removed the infected tissues leaving big holes on her legs. They sent the specimen to the CDC (Communicable Diseases Control) in Atlanta and it sent back a diagnosis that had never been published in any medical textbooks. The second case in the world had been recorded, according to CDC.

The story was stimulating to me. I might find a new publishable disease. However, the quest was very challenging. First, I had to have a good laboratory, which did not exist in Bayun Hospital. Luckily, Ton was a medical person and was supportive with my interest in setting up a good laboratory. He ordered lab supply from Jakarta, which was not only expensive but time-consuming as well logistically. I borrowed a monocular microscope and centrifuge from him.

The most difficult was the lack of electricity. I had to rely on the sunrays through the window for viewing the slides under the microscope. Only a year later—having learned from a researcher of the US NAMRU in Oksibil—I knew I could use a flashlight for doing so, but batteries were expensive though.

Centrifuge was essential for checking urine specimen. I had one in Bayun but it must have been twenty year old. To obtain the sedimentation of the urine, I poured the sample into two tubes; plunged the tubes into the tube holders of the centrifuge; and then spun the handle for 10 minutes, minimum, non-stop by hand! For 1 or 2 patients, I could do. For more than 30—the minimum sample size for statistical analysis—was impossible.

Urine’s microorganisms are not as diverse as the stool’s. Mostly it has only bacteria and yeast. One day I saw something big, long, and moving in one urine specimen. It looked like filaria, the bloodworm that causes elephantiasis, but it was not possible. They only lived in the lymph and blood circulation systems. I looked filariasis up in my Mandell’s Infectious Diseases; it was possible the worm penetrated the bladder wall.

Filaria is a nocturnal creature. With a few exceptions, they only swim in our blood vessels in the evening. This creates a challenging task in diagnosis and research. For accuracy, we have to take three blood samples from one subject within four hours: 10pm – 12am  – 02am. Puncturing the fingers of more than 50 people in their still houses three times in one evening? They will not let us do it . . . unless the compensation is attractive.

Ton did it by making a feast, providing pork, cigarettes, and traditional alcohol to the whole village. He found that 75% to 90% of adults carried filaria. ‘Fortunately’, only about 10% of them had clinical signs and symptoms. Of course, we can treat them easily with diethylcarbamazine tablets, but if they still stay in the region, they will be reinvested.

The ‘zoo’ in their body is in the digestive system. In one gram of the feces of the young children, I found 3 – 6 species of worms, 2 – 5 protozoa (single cell microorganism, amoeba is the most famous), various yeasts, and numerous bacteria. The second ‘zoo’ is their skin. Some of them had tinea imbricata—kaskadu the local term—, which is a systemic fungal infection; their whole body is like being tattooed (see the photo).

In addition to human specimens, I also collected water from various habitats: trench, swamp, river, and sea. There were hundreds kinds of little creatures living a few drops of these waters, which I knew nothing about them. Watching them moving under microscope was exciting. Biodiversity is always wonderful, except in our body.

Posted On 27th April 2013 ~ 0 Comments
“Reduce suffering, prolong life” is the moral guide for medical doctors. Most doctors still follow this guide, and we expect most of the patients will

Posted On 2nd June 2013 ~ 0 Comments
“Read this line,” I pointed at the first line of the page. She looked at it. One minute passed but no word came out of