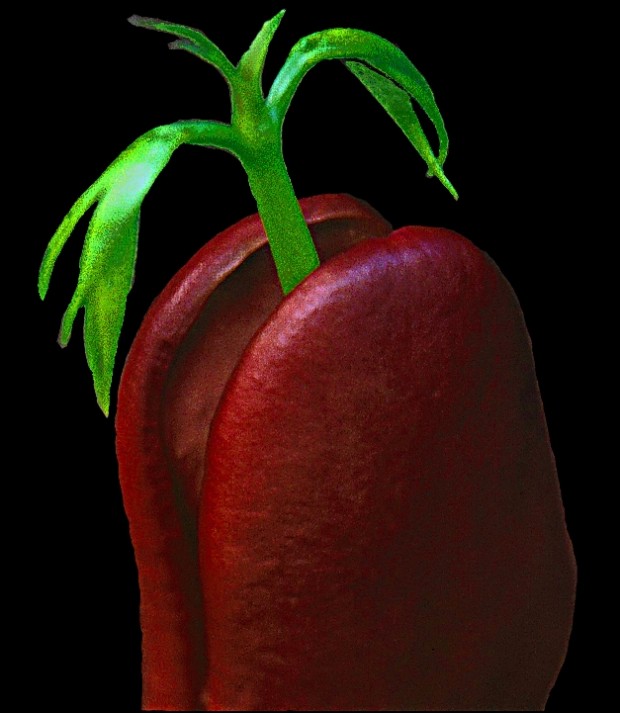 When I said I wanted to study at the Institute of Agriculture in Bogor, my father sarcastically said, “You want to become a farmer, huuh!” He forgot that 90% of the buyers in his shop were farmers; they might be poor individually, but together they had provided us good income, which enabled him to finance his big family.

Farmer is poor–according to my Dad–and not smart. This latter stereotype came from my travel mate David Stanley. He said—reacting to my wish of becoming a farmer—it was impossible for me to be a farmer because I knew too much. Well, farmer’s life looked peaceful, not much thinking, not listening to litany of sickness complaints every day, not being sad and frustrated from failing to save patient’s life.

David might have been right. Analytical person like me would not be an ideal farmer, but I still wanted to and, therefore, bought many seeds in Jakarta. I had noticed that the land around the Bayun Hospital was only grown with shrub. And there was no market, no shop, not even a kiosk in Bayun; the only vegetable was watercress growing wildly around. Pater Ton agreed to pay the cost of labor; his standard was 200 rupiah per person per hour. I thought it was too low; a package of instant noodle was 400.

I hired 8 men to stack planting mounds. First, they had to clear-cut the shrub and other wild plants with machetes. I watched them working from the hospital. The progress looked good in the first three days. But afterward, I hardly saw any progress. They only worked when they were aware I was watching them. I did not have time to watch them; my main job was to take care of the patients. Moreover, I would have lost a lot blood if I stayed long in the bush. Mosquitoes and gnats sucked blood a little, but leeches and lalat babi, similar to horse or deer flies, sucked a lot and their bites hurt and later the bitten skin was swelling. They are the most annoying creatures in Papua.

My workers spent most of the time with smoking and chatting. I did not mind they smoked and nattered if they kept working. They did not. The Asmat seemed had a problem with multitasking. They could only do serial task: one after another. Hiring a supervisor? Recruitment would be challenging.

The work had to be done soon because in November the monsoon would begin. All the land would be flooded by high tide. Because incentive system was a universal solution for laziness, I offered it to them. If they finished the task within two weeks, each would receive 20,000 rupiah; if they completed it sooner satisfactorily, they would get bonuses; however, if they could not finish it within two weeks, they would receive less than 20,000. The longer the delay, the less they would receive. They accepted the deal.

They worked hard without being monitored. Two days before the deadline, I noticed that some women and children were hiding behind the bush when I inspected the work. They were ‘cheating’: bringing their wives and children to help. However, I pretended not to see it. They did it in time. Win-win solution.

Farming in tidal area is difficult, especially for a greenhorn like me. The soil is acidic and its texture is sticky—according to the farming guidebook. The high salinity is obviously not good for vegetable and fruit plants. Moreover, the land can only be planted twice a year maximally due to the high tide between November and February.

First I had to form parallel mounds—30 to 50 meters long, 1.5 meters wide—separated by trenches: two in front of my house, 8 at the back of the hospital. To heap these mounds, my workers used shovels instead of spades because the soil was soft and sticky. Having them finished, I spread fine granules of seashell on the mounds—ideally calcium carbonate powder, but it was not available—to neutralize the acid of the soil.

I waited for two weeks before planting the seeds I brought from Jakarta. I had had no idea which plants would grow well in Bayun; I bought red and small chilies—the most important ones because I cannot eat well without them—tomato, cucumber, lettuce, cabbage, beans, corn, and water melon. For every spot, I hung a label, covered in a plastic bag, attached to a stick.

The seeds needed to be protected from too much sunlight. I asked some workers to collect mangrove trunks and used them as the poles and roof frames; then I covered the frames with coconut leaves. Once or twice a day, I watered the mounds with collected rainwater. Luckily, I did not have to do this every day because rain dropped almost every day.

Every day I counted the new seedlings coming out of the ground; each seedling brought joy to my heart. In addition, the poorly-growth banana trees behind the hospital grew well now—the shrub had retarded the growth. Big and yellow bananas were hanging from almost every tree. It would not be long the fried bananas, the food I missed much, would be on my table in my house.

The day of harvesting bananas came. I had known which trees were ready to cut. I was shock on reaching one of them. They were still there, but the bananas had disappeared.

I hurried to the village and asked some people if they saw people eat bananas. All shook their heads. They must have known who the thieves were, I was sure. The Asmat did not talk to outsiders about the theft done by their friends. I checked house to house without luck. Everybody was staring at me but silent.

To prevent the next theft, I painted numbers on the tree trunks that already had bananas. It worked. The first harvest was pisang raja, banana king, the best banana in Indonesia. They were so good—I had not had bananas for about nine months. However, they stole again my bananas.

It was extremely difficult to catch the thieves. A couple times, I saw their shadow in the garden and chased them. They had disappeared when I reached the spots. They were too fast for me. The theft was bolder: they pull out my sweet potatoes plants, cut the tubers, and replanted the plants! What should I do?

The next day I announced in the waiting room that the hospital would refuse to treat boys above 12 years and men until the thieves surrendered. This population group—I suspected the thieves in this group—was generally healthy. However, some of them were sick occasionally and came to the clinic. I evaluated them and sent them home without medicine if they were not too sick. I felt guilty, but this was the only way to catch the thieves. These patients, of course, grumbled and remonstrated.

After a week, some people ‘sang’. I looked for them, but they had run away to the jungle. I wrote their names on a used cardboard and stuck it to the wall of the waiting room. They showed up a few days later—probably under pressure by the elderly, the men who were sick more often. They reasoned that they needed some money (for buying tobacco?). I lent them fishnets and asked them to bring me the catches for two weeks. They did so and I paid the fish. The Sisters and I ate fish only for those weeks.

In the third month, some plants were ready to harvest. Now our menu was not only super mie, instant noodle, watercress, fish, and rice, but a variety of vegetables as well. And, my sambal terasi, the shrimp paste chili, was always available. A month later, the watermelon plant fruited; I numbered them with paint to inform the people that I would know if they stole them—they might have been curious about the fruit that they had never seen in their life.

The harvest was too much for our need. We had no fridge to keep them last longer. I sent vegetables and watermelons to the Sisters, Fathers, and Puskesmas doctors in Agats. They were very happy with my presents; fresh vegetables were rare; watermelon had never been found there. Suryo, one of the doctors, teased me about a new species of watermelon that had numbers on their skin.

As the transport to Agats only twice a month, I still had a lot of extra harvest. I brought them to Kamur at the riverhead and distributed them freely to my friends and my staff. It was so great to see these people happy. Living in the interior was so hard; sharing—material and feeling—was a survival mean. If they came down to Bayun for shopping on the ship from Merauke, they slept over in my house. The next day they would return to Kamur; their long boats were full of merchandise from the ship and vegetables from my garden.

Posted On 20th May 2013 ~ 0 Comments
Scientists show that pets, especially dogs, help control blood hypertension and stress. But that was not my reason to have pets whenever feasible. That feasibility