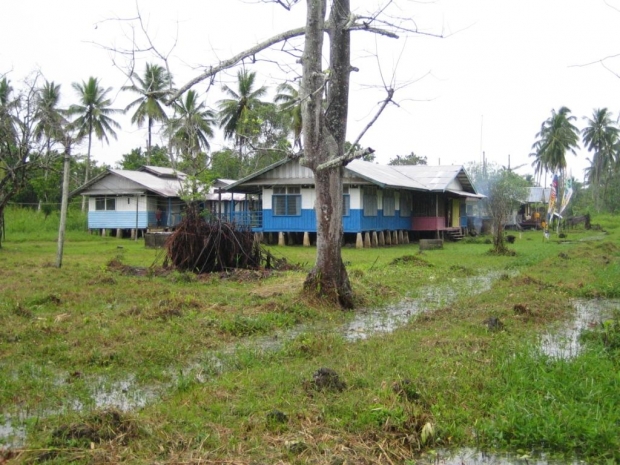 Pantai Kasuari (abbreviated Pari, Casuarinen Coast) was a district of Merauke Regency. Bayun–located by Arafura Sea–is one of its villages. It is not found on the standard map, but you could try with Google Earth or Maps if you are curious—the key words are ‘Bayun, Asmat, Papua’. In Merauke, if a civil servant were assigned to Pari, people would ask, “What sin did he commit?” Because of its remoteness, Pari was considered a place for disposing of unwanted people.

The Arafura Sea in Asmat region was lined with mangrove swamps beyond muddy coast. Mysteriously, Bayun was the only place with white sandy beach. It might be for this reason Father Antonius van der Wouw had chosen it as the Mission complex around 1970s. He planted many coconut trees and created a drainage system. It looked perfect: an airstrip, presbytery, convent, hospital, primary school, and teacher housing. The local village lay next to the complex. Ideal habitat for human beings, an oasis. Unfortunately, it was also an ideal habitat for mosquitoes.

The doctor house was just on the right of the hospital. It stood on big poles of ironwood, about 175 cm above the ground. There were three bedrooms and a center room. The window of this center room faced the coast; I love seeing the sunset through the coconut trees from inside the house. It would have been more fun if I did it on the beach. Not possible. Mosquitoes ‘patrolled’ 24 hour, thousands, might be millions, of them. Their bites were not only itchy but dangerous as well. Bayun is a holoendemic—all year long—malaria area.

There had not been any mosquito nets on the windows. On my request, Ton sent a carpenter from Basiem to install them. Somehow, there was a technical problem: the windows were not able to close. I had to close them in the evening because the air could be freezing and the strong wind would blow the rainwater into the house through the windows. Therefore, every afternoon, I had to release the framed mosquito nets and close the window leaves. This took only a few minutes, I did not mind, but this short period brought some mosquitoes into the house.

The other major problem of the house was the location of the bathroom and restroom. They were outside the main building. Again, I did not mind to walk a few meters, but I objected to donating my blood to anopheline mosquitoes when I needed to pee or poo in the evening—these malaria mosquitoes only ‘drink’ in the evening. For this problem, Ton did not help me with any solution. Just lived together with malaria.

The hospital and convent had a well each. But the water was not clear and rather salty. Like the people in the other interiors of Papua, we collected rainwater running off the aluminum roof for bathing and drinking. It was adequate most of the time; only when there was no rain for two weeks—which rarely occurred—we had to save water by taking shower less often.

The hospital was a larger copy of my house. It consisted of a lobby for patient waiting, an examination room, medicine room, delivery room, kitchen and two wards—woman and man. Its windows, strangely, were better than the ones of my house: all with glasses and mosquitoes nets. Therefore, we were safe from the mosquitoes inside. However, we were still exposed to them in the alleys when we move between rooms.

Sister Dorothea, a nurse assistant, had been in charge in the hospital for the last two years. She was trained on nursing for three months before coming to Bayun. Ton had given up looking for a doctor. The last one, who was also the first one, left Bayun eight years before. As he did not believe in her competency, Ton had not sent much medicine—the same reason of the Regency Health Office in Merauke for Puskesmas Kamur. Therefore, Dorothea had only cotton rolls plus paracetamol, antipyretic for fever.

The most disappointing for me was the condition of the wards. They were untidy and dirty—Ton reprimanded Dorothea for this—and there were no mattress on the beds: all six wooden beds in each ward. The encouraging facility was the x-ray machine, the reason I had 3-month training in Yogyakarta. It turned out the radiology training was time wasteful. The machine was broken. However, it might be a blessing in disguise. The radiology room was not protected for radiation.

As there had not been any inpatient, and the outpatient had been very few, the hospital was a refuge for snakes at high tide in the evening. I saw some of them crawling around in the alleys, about two meters with black and yellow stripes. They had lived above the ceiling until Yeremias, the janitor, killed them all. I had not allowed him to do so, but the Sisters told him when I was away. Women had been snake phobia since the Eden time. A few weeks after the killing, the mickey mice invaded the hospital. They bit and ate everything: medicine, sago, ceiling, and mosquito nets.

It took me six months to organize and stock the hospital. Luckily, on the third month, Sister Victoria, an experienced midwife, replaced Dorothea. Vic was in charge of the hospital; I took care of the villagers living outside Bayun.

The operational cost of interior hospitals was very high, but that was not my reason to change the payment system. The service in the Bayun Hospital was free but the free service had negative impact to the health behavior of local people. They did not care of preventing sickness.

Pater Ton was skeptic about my idea to require people to pay 100 rupiah (4 cents dollar) for one visit. “They don’t have money,” he said.

“They have, Pater. Everybody smokes,” I showed him the evidence.

“It was up to you.” That was encouraging decision from the Boss.

I announced the new policy in the lobby for a week. If they did not have money, they could pay with sago, fish, or anything valuable. Alternatively, the family of the patients had to work for the hospital, such as cutting grass of the hospital yard. They grumbled but no opposition.

Most of the women brought a piece of sago; its value was not more than 50 rupiah because it was so small. It even became smaller when they were willing to share it with the patients who came with nothing. We just accepted it; arguing with them was exhausting. Moreover, the value of the payment was not my goal, but the appreciation of the service and encouragement of sickness prevention.

One day a father of patient refused to pay for the treatment of his son. “I have no money,” he said. I left the examination room and came back with a machete.

“You could cut the grass in front for the payment,” I handed the machete to him. Staring at me for a moment, he took it and cut the grass. I went home to pick something and he was gone when I came back.

“Where is the man I asked to cut grass, Sister?” I asked Sister Vic.

Even with free service and severe sickness, the Asmat did not like to stay long in the hospital. After feeling better a little, they would ask to be discharged. In general, after three days of hospitalization, they would insist on going home, no matter the physical condition. To keep the patient longer in the hospital, Ton had built a big building across the hospital. We called it Rumah Sakit Api, fire hospital. It worked. The patients were more willing to stay until their condition was much better.

The Asmats are not pyromania, but they love fire. They eat and sleep around a fireplace; they keep a fire at the front end of their dugouts; and many of them hold a fire while moving around—for lighting their tobacco roll. In the hospital, they were not allowed to make a fire inside the ward—some had done so and left black spots on the floor.

When a patient was admitted to the hospital, the whole family, extended, would stay. During this period, the hospital would feed not only the patient, but all of his or her family as well. The ward had six beds, but often there were 30 or more people inside. Eating there would make the ward messy. Thus, the family was placed in the fire hospital where they could do whatever they liked with fire; they were allowed to visit their sick member during visit hours.

Posted On 13th October 2013 ~ 0 Comments
Try to recall your life events during your first three years, you will get either none or tiny fragments. Our memory records everything we see,

Honesty: any gen for it?

Posted On 13th April 2013 ~ 0 Comments
Any correlation between honesty and stupidity? Is honesty inherited, like the intelligence? The second question often pop-up into my mind when I see people cheat