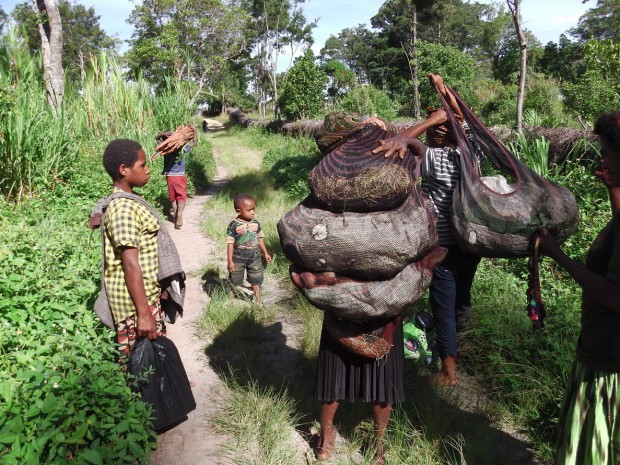 Although I had decided to choose Papua (Irian Jaya then) as my work place months before graduation, I needed to make sure I would like it. One week after graduation (June 1989), I was in the plane to Papua with David Stanley, a cinematography student from the University of California at San Diego. He was interested in making movie about me because I was a weird person and Papua was a wild island. Matched. We left Jakarta at 5 am and arrived in Sentani airport at 5 pm. 12-hour trip by air was not as bad as one-week journey by ship.

I knew nobody but Yoke Suebu in Papua. She was my junior at medical school; her father, Barnabas Suebu, was the Governor of Irian Jaya—it became two provinces, Papua and West Papua, later on. Sentani Airport is 45 km west of Jayapura, the capital of the province. I asked the taxi driver to take us to Gedung Negara (State House or Building) in Upper Dock 5—most places along the coast of Jayapura named with Dock plus number (2, 5, 7, and 9).

Upper Dock 5 is an upper class residential neighborhood. The best and largest house, of course, is the Governor’s official house. The sentries were military police. They talked on intercom before directing us to the biggest building. Yoke was waiting for us in front of the building—Governor’s residence. I felt relieved.

“Finally you came,” Yoke greeted us. She had known David already at the Frisbee games in our campus in Yogyakarta. “I will ask Mama where you will stay.” So many buildings are in the complex, and Mama was the Boss. And we got a luxurious house—comparing with my boarding house—and abundant delicious food and fruit; Yoke sent someone downtown to buy them.

After having dinner, Yoke introduced us to the Boss. She was really a boss; Yoke had small posture, but her Mama was almost double of her size. The family is from one of the islands on the Sentani Lake. All of them, including the Governor himself, were very friendly and kind.

We explored Jayapura the following day; Yoke provided us a car with the driver. Jayapura lies in Humboldt Bay of the Pacific Ocean. There are two small islands in front: one for Papuans, the other for South Sulawesi people. The center of the town was small; we could walk around it within 15 minutes. There were only three hotels and one restaurant. About 75% of the population were non-Papuans.

In the afternoon, Timotius, the driver, took us to Angkasa (Sky). The car climbed steep and winding road. We got off at the top; it was cold and windy but the view was astonishing. We could see the whole bay and town—blue ocean in front, green hills at the back.

Living comfortably was not I was looking for in Papua. I wanted to know its people. As we were required to go with driver, I felt awkward and decided to move to ordinary place. Timotius introduced us to Fred Suebu, an older brother of the Governor. He let us stay in his simple little house and moved his out their bedroom. Fred married a Javanese woman, which was rather rare then. The only thing bothered us was the loud noise of the power engine in front of the house; it the central power source for the whole Sentani area.

I asked people where the most “natural” area was. The answers were various, but we chose Ilaga because we wanted to see the iceberg. Papua had three mountains caped by ice but one has no more ice cap since about 2000. We were heading for the base of the climb of Cartenz Peak, almost 5000 meter above sea level, the highest in Southeast Asia.

We flew first to Nabire, the regency capital of Paniai, because no direct flight to Ilaga from Sentani. The flight was about 1.5 hours. As there was no hotel in Nabire, we went to the Office of Health Regency. Dr. Condro, the head, let us stay in his house for two nights. All doctors were brothers and sisters. Yes, it is “were” because I do not see this sense of medical family anymore. In the past, doctors felt guilty for asking for fee from the other doctors or their family; now money overrides the extended medical family.

We took twin otter airplane of Merpati, the state airlines. It has only 18 passenger seats, but it was the largest aircraft can land in the airstrips of the interiors—grassy land between 400 and 600 meter long. The engine and propellers are very noisy; I have no doubt they will make us deaf if we take this plane every day; the pilots put on earphone that soundproof. However, I was not bothered much by the loud noise because I was busy staring at the lust rainforest below us. They were so dense; the canopies were in stratified pattern randomly. Some canopies were white dotted: the birds, the cockatoos; other canopies were full with colorful birds, the parrots.

The plane descended and circled twice before landing on the airstrip of Kago, the capital of Ilaga District. One third of the airstrip sides were lined with people. Most men wore penis gourds, women grass skirts; my dream came true: I saw the Papuans in their authentic clothes on their own land. And, once on the land, David was the celebrity; everybody surrounded the only white man in Kago.

Lying 2500 meter above sea level, Kago was the coldest village I have ever stayed. I kept my sweater on night and day while the locals were practically naked—penis gourds and grass skirts do not warm their bodies. Still I was trembly when standing in the open space; the wind from the Cartenz peak was puncturing my skin. If we were lucky, the sun shined for three hours between 8 and 11, but no sun light penetrating the fog for a week was common—it means no flight bringing rice, fuel, and other basic needs for the straight hair people, the non-Papuans, for the whole week.

The straight hair were civil servants, police and soldiers; they were Indonesians from various ethnic groups. The largest group was the kiosk owners; except for one kiosk owner, all were from South Sulawesi. Their relationship with the indigenous people was in general exploitative. This resulted in explosive situation.

A few months before, a climbing team from a university in Jakarta was killed. Nobody knew who killed them, but the police and military assumed the guerillas did it. However, if they had been there, they never bothered the Indonesian teachers and us.

Traditional market is always the best place to observe local culture because it functions not only as the center of economic activities, but sociocultural as well. In Ilaga, every major village had one market day per a week; Kago, the center of the district, twice. The Kago market was at the side of the airstrip, in front of the kiosk row. Normally Kago was a quiet place because its population was less than 500, but during the market day, it was very noisy. Thousands of people gathered around.

People in the surrounding mountains and other valleys left their villages early morning, or even the night before. They, I mean the women, carried their goods—vegetables, fruits, sweet potatoes, taros, noken, etc.—on their backs. Some of them carried their young children on top their merchandise. Their fitness amazed me: walking barefoot up and down steep mountains in the dark and freezing air with 20 to 40 kilogram stuff on the back for hours even days!

I sympathized with these Papuan women. One morning I stopped a group of women on their way to Kago market—still two hours to go. They carried bananas, sweet potatoes, and vegetables. I asked them how much for the bananas and sweet potatoes, but they did not answer. My landlord in Gome village told me they did not want to sell them. I offered the price higher than in the market. They still refused to sell it! You will only understand their reasoning of not wanting more money and less sweat if you watch their activities and expression at the market.

Except for firewood, all sellers at the market were women. They sat on the ground—some spots were still muddy from the rainwater the night before—behind their stuff; some were breastfeeding their babies. These women were always busy even if they had no buyer. Selling things was secondly important for them; the most important was meeting with other women from other villages. Their mouths were busy exchanging news, or probably gossips, and their hands weaving nokens. As I did not understand their language, their conversation like hum to my ears. But I could see that they were happy: market day happy day.

The men were busy and happy too. They moved here and there, and stopped for chatting among them, which reminding me of ants; otherwise they did window-shopping at the kiosks beside the market. Real shopping had to wait until their wives selling out. The children joined the happy event; the schools were off because their teachers were busy buying and selling.

The goods were piled on the ground; each pile consisted of 5 bundles of vegie, or 6 – 8 sweet potatoes; all the same price: 100 rupiah (1 cent dollar) per pile. However, if you gave them one coin, they would refuse. For the reason unclear, at least to me, they only accepted “uang merah,” the red money—they could not read the value. If you gave them 1000 bank note, they would ask you to change it first to the money exchangers. Thus, it was much recommended to bring a lot of 100-rupiah bank notes if you did want not to lose your money to the exchangers, all straight hair. For 1000 bank note, they would give you 8 bank notes of 100.

Around noon, the market dispersed. The women’s noken (fiber bag) were much lighter because they only contained some packs of instant noodle, salt, sugar, MSG, or cigarettes; little bottles of cooking oil; or one tin of sardines or corned beef; 30 kg of natural products became 1 kg of manufactured ones. They could not buy more from the kiosks because one pack of instant noodle, they had to sell 5 piles of vegetables, fruits, or potatoes; for one little bottle of cooking oil, 10 piles.

My attitude towards the Indonesian traders in the interior has been ambivalent: antipathy and sympathy. They sell merchandise with ridiculous prices. For instance, one pack of super mie (instant noodle) was 750 rupiah (1989); they bought it in Nabire for 150 rupiah; the airfare for one pack was around 50 rupiah; they made 600 rupiah net profit; they could sell 100 packs per day, and they gained more money from selling other stuff. Trying to get lower price? No chance. No vendor dared sell things at lower prices because they would be intimidated and driven away. However, these traders suffered much too for earning this easy money: sleeping in a small, freezing, and dark room behind the kiosks, no communication with the extended family in their home villages, and no entertainment such as television. Their life looked dull too me.

Posted On 16th October 2013 ~ 0 Comments
“If you want to stay, I can help you.” James Peacock had been very kind to me. This offer was the peak; I was leaving