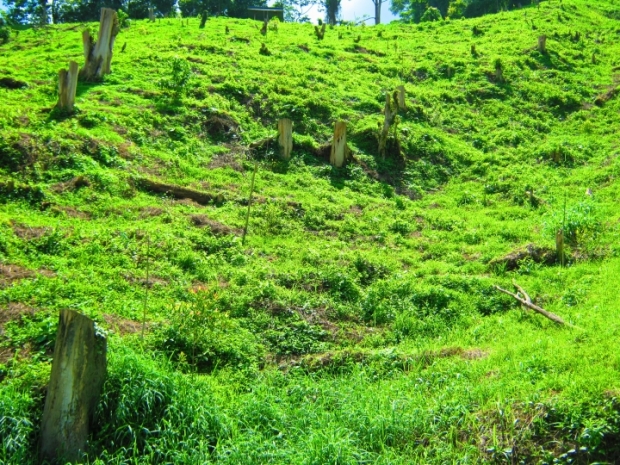 According to the official statistics from the Indonesian Government, in 2010 Indonesia had 85 million hectares forest. When I came to Papua in 1989, it was 144 million. Within 22 years, almost a half of the forest disappeared. Assuming the deforestation rate constant, all the forests of Indonesia will be gone in 2035—like in Java and Bali now.

‘Forest bandits’ was the name Pilot Hans gave to some of his passengers. Robin Hood? They did not look like thugs or heroes but more like executives of business companies. People in Asmat always tried to make them pleased because they had a lot of money. They owned logging companies, legal and illegal.

They had come to Asmat since early 1970s. Initially only the straight hair they hired clear-cut trees with chainsaw; the tribal people protested because those trees grew on their customary lands. The police and soldiers—paid by the bandits—got involved. The protests stopped at the noses of machine guns; later the bandits did not even need guns to end the protests. They bribed the tribal chiefs with modern things such as tobacco, alcohol, canned food, radio, cassette player, etc.

When the need creation on the local people was successful, the companies easily recruited people to cut their own trees. They paid 5,000 rupiah ($2) for a log 100 cm in diameter and 6 meter long; this was the payment on the ship. To get 5,000 rupiah, 3 – 4 people had chop a huge tree by axes; dragged it to the main river; tied it together with other logs; drifted them to the river mouth where the ships were anchored; and pulled them on their boards. The logs would arrive in Japan and other developed countries; each worthy $100, at least.

During the felling season (2 – 4 months), except for a few children, women, and old people, the villages were deserted. All healthy people stayed in the jungle felling trees for the companies. After 2 – 3 weeks, the people in the villages would lack of food. In the past, all of them stayed in the jungle collecting sago and hunting games; foods were abundant. They always gained weight when they came back from the jungle. Now they lost weight and gained new diseases.

Hernia had been uncommon before the logging companies came, according to Father Ton. I estimated that 10% of men suffered from hernia with various degrees, from on palpable only to irreversible intestine outside the body. The other disease was not new but much more prevalent: the respiratory diseases. The Missionaries had introduced tobacco to attract these semi-nomadic tribes to settle in villages; they controlled the tobacco supply—the rolled type. The impact to respiratory system worsened the fireplace smoke’s effect. The logging companies traded clove cigarettes with the logs the locals cut. I believe these cigarettes had stronger addiction effect creating chain smokers.

The companies paid the locals after the ship left. It meant about two months or longer after they started working. These people would gather in Kamur for days even weeks to wait for their wages because often the bosses had not come with their money. They pocketed money 15,000 to 20,000 ($6 to $8) after working for two months in the jungle; some might pocket nothing because their wages had spent up on cigarettes and other modern things they had received before. Of course, they could not check if the calculation was correct because they were illiterate. They did not dare protest either if they thought it was incorrect because the payers were the heads of the local police and army.

I sometimes I watched the log boarding process at the Kronkel River. The local officials measured the diameter of the logs and classified the ones less than 60 cm as unqualified. The feller would not be paid for those logs. Strangely, they still ordered to pull up these unpaid logs onto the deck of the ship. I was sure the company paid the logs, but the money went into the pockets of the local officials.

Posted On 17th August 2013 ~ 0 Comments
"You are on-call. The nurse, by phone, has reported a patient with the following information: . . . What will you tell her?" the professor