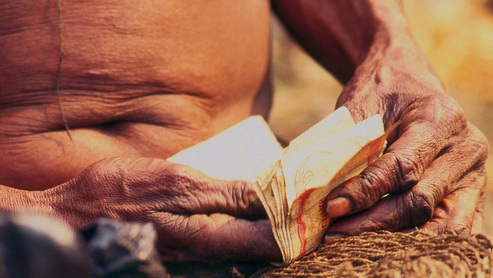 “Doctor, there is a sick woman at the beach?” one of the boys at the yard told me.

“Why did not she come to the hospital?” I said from inside the house. I did want to be bitten unnecessarily by mosquitoes outside.

“She cannot, Doctor. She is not able to walk.”

I took my stethoscope and followed the boys. A straight hair man that I had never met before stopped me near the airstrip. “Doctor, please help my wife,” said he.

“Where are you from?”

“I am from Atsy,” 4-hour boating with a 40-horsepower engine on friendly sea. “My wife is giving birth but we are late to come here.” I told him to take me to his wife right away. We ran along the coast for about one kilometer before seeing the crowd.

What surprised me was not the baby had been out of the mother’s body, but the mother was a curly hair. The mixed marriage between two persons with different hair—Papuan and non-Papuan—was always interesting. They were always admirable because the process was always complicated. There is a big culture gap between the couple, much bigger than between the Western – Asian couple.

The placenta was still inside the womb; the baby looked normal; and the mother was fully conscious. No emergency intervention was needed. But they needed to be transported to the hospital as soon as possible because of the blazing sunlight.

I asked four local men to carry the mother to the hospital. “Why did you take her to the primary health center in Atsy?” I asked the husband—he was from Makasar, South Sulawesi—on the way.

He left the delivery room but returned soon. “Doctor, do you have any change?”

“To pay the Bayun people.” I was furious and rushed to them.

“You are terrible. You are asking money for helping sick person. Shame you to have name John, Paul, Francisco.” All were silent. “Fine.”

I hurried to my house and returned with some money. “Eat this,” I flung the money down onto the floor in front of them and entered the delivery room. They disappeared, so did the money.

The Asmat men changed my personality to some extent. Before coming here, I had rarely been angry—once a year had been too frequent already. If I were still trying to be cool, I would have been insane. These men did not understand Javanese way to express unhappy feeling.

Posted On 20th May 2013 ~ 0 Comments
That unforgettable, and nightmarish, case was started with a SOS radio message from Pirimapun. I had just arrived in Bayun a week before. Pater Bob,