The Dreamland of the Poor 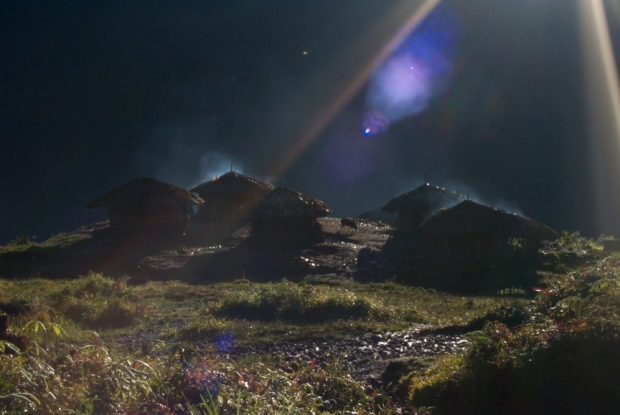 The pain on one of my toes woke me up. I grabbed my flashlight by the camp bunk; everybody in the house was still asleep. I touched the hurt toe blindly—the wonder of our nerve system—it was wet: bleeding. I had only one suspect of the attacker. They had been around day and, especially, night: eating our food supply, biting our clothes, books, papers, and laboratory material, and travelling on our bodies and faces when we were sleeping. But they had never bitten me before.
The wound was minor but it worried me because the biter was one of the rats of newly cleared rainforest. They might be able to give me leptospirosis, meningitis, plague, rat-bite fever, salmonellosis, tularemia, or even an emerging disease similar to Ebola. Who knows! Well, let it be. Thousands of transmigrants in Arso had the same risk of contracting terrible tropical diseases as me; malaria was the worst.
Arso is a transmigration site located near the north border with Papua New Guinea—at the south near Merauke, the first transmigration sites line the border. This government-sponsored resettlement implements the idea of reducing overpopulation in Java, Bali, and Lombok islands; thousands of people have been flown or shipped to the remnant of rainforests in Papua within a few years.
I regularly checked the schedule of these human shipments with the transmigration office in Jayapura. They often informed me only a few days before the arrival, driving me crazy of contacting and arranging the US NAMRU team from Jakarta—I was the only permanent senior staff in Papua.
The C-130 Hercules bringing the transmigrants—packed up to 200 persons—landed in the Sentani airport late in the afternoons (it left Java early mornings). The transmigrants would be taken to a temporary shelter near Post 7, Sentani. Here, the NAMRU team (3 – 4 persons) had to withdraw blood of more than 150 people as fast as possible—should be less than 5 minutes per person—because the shelter did not have electricity power and we did not want to hold the exhausted people from eating and resting too long.
US NAMRU used the transmigrants for two kinds of studies: vaccine development and drugs trial (Malarone was one of them). The first blood samples taken in Sentani were expected not to have antibodies against plasmodia—assuming all those people came from malaria-free areas, which was never correct because a number of them were perennial transmigrants around Indonesia. The next samples taken at the transmigration sites were expected to have them—those people now had been exposed to malaria. Monitoring these blood samples over time would provide better understanding on how our body developed immunity against plasmodia. This understanding, hopefully, would lead to the invention of malaria vaccine—a dream that has not come true up until now.
The transmigrants had a dream too. The Government would give them a house, 1.5 hectares of farmland, and food for a year—for landless farmers, the site sound like an Eden. The next day they were taken by truck to Arso. They reached the center of Arso within two hours, but, most of the time, they had to walk to the location another two hours because of the heavy rain. The asphalt road was not finished yet, so were bridges.
The site was supposed to be ready before bringing in the people. In reality, it had never been. The contractors—mostly local businessmen—felled all the trees of pristine rainforest and sold the best logs to Jayapura, a fortune, and built the houses with the rest of the logs. They even did not bother to dry the planks first, or clean up the scattered stumps and branches around the houses. They knew the transmigrants would not report their ‘misbehavior’ to Jakarta. Having a house—even with no electricity—and a farmland was a luck to all transmigrants.
Within a few months, the luck—for most of them—transformed into plagues. The clear-cut rainforest created favorable breeding places to anopheline mosquitoes and the blood meal was abundant. The mosquitoes feasted on transmigrants’ blood; the malaria plasmodia invaded their bodies up to the brains. In the next six months, 15% to 30% of them ended up under their dreamland: stiff and cold.

Posted On 28th September 2013 ~ 0 Comments
“I quit” and bang! The little bang of the phone handset hitting its cradle: the expression of my disappointment. The BIG BANG followed it in